A grown-up take on immaturity

In 2004, audiences were introduced to Harold (John Cho) and Kumar (Kal Penn), a couple of crazy marijuana-loving college students, and witnessed this generation’s Cheech and Chong as they go through hell and back for the fast food restaurant’s tiny burgers and  their escape from Guantamo Bay in 2008s sequel.
In A Very Harold & Kumar 3-D Christmas, now in theaters, Harold and Kumar are at different stages in their lives and have even left their friendship behind. In an era in which 3-D has been over done, this film uses the effect to its full advantage. In one of the most memorable scenes, smoke circles are blown into the audience, almost poking fun at the effect, and at one point in the film Harold even says “Hasn’t the whole 3-D thing jumped  the shark?”
The 3-D is almost an afterthought compared to the storyline, which reintroduces us to Harold, a now successfully married businessman living in the suburbs, and Kumar, who is now a responsibility-free, medical school drop out.
Because of their differences, the pair has drifted apart and is reunited by a mystery package that arrives at Kumar’s old Hoboken apartment, with “Harold Lee” written on it. On Christmas Eve, Kumar chooses to drop off the package at his ex-best friend’s house.
At the time, Harold is dealing with an unwelcoming Latino in-law who expects Harold and his daughter  Maria to host the perfect Christmas.
When Kumar enters the house, drama ensues and he causes a fire inside that house that destroys Harold’s father-in-law’s most prized possession, a carefully grown Christmas tree. From there, the pair leave with the  purpose of restoring peace into the Lee household.
During the search, the two end up at a party at  a Russian mob boss’s apartment, get caught playing beer pong with his teenage son and in a compromising  situation with his under-aged daughter and drug Harold’s friend’s baby daughter with everything from marijuana to cocaine.
The film takes the viewers on a trip, with a scene that features a city and characters completely made of clay after the minors at the party drug their old, uninvited guest. The expected return of Neil Patrick Harris  playing a fictitious version of himself, is everything  audiences were expecting. Playing on the recent  spotlight cast on his sexuality, Harris’ unusual character nonchalantly says being gay is only an act to have more access to women at his Christmas musical.
The film holds a deeper message, as both of the main characters are facing life-changing events. Harold and his wife have been attempting to conceive with no success, while Kumar’s ex-girlfriend tells him that she is already expecting.
The pair hit a moment of clarity when Harold’s deep desire to make his father-in-law happy, because it would in turn make his wife happy, makes Kumar realize that giving up on vices, such as marijuana, for the person he   loves is all part of growing up.
The film grossed $13.1 mil at the box office in its opening weekend. The film stays true to the usual crude humor, massive sexual references, language and all-too casual-drug use, possibly making new audiences uncomfortable while watching.
The film offers an early, warming Christmas feeling while providing undeniable humor that everyone can use in their lives every once in a while. Not only did it provide great entertainment, it also taught a deep life lesson that although most people have vices, there will always come a time in which we must all grow up. 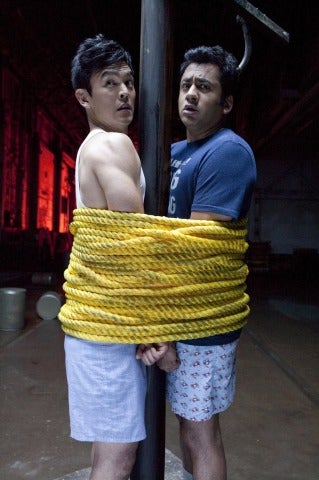