The party is over: Jersey Shore gets the axe 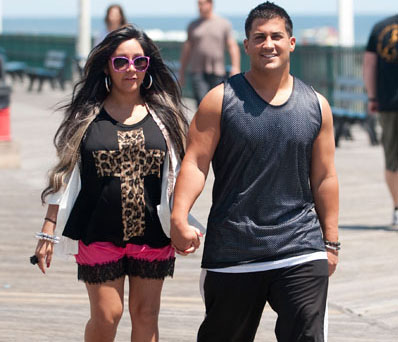 After five seasons, the hit MTV series Jersey Shore has been cancelled. The show, which continues to be MTV’s highest rated program, will conclude with its sixth season which premieres Oct. 4.

On August 30th MTV reported news of the show’s end. Before the big goodbye, MTV will be airing a one hourJersey Shore farewell special entitled “Gym, Tan, Look Back”. Airing right before the MTV Video Music Awards on Sept. 6, the special will feature past the highlights of the show and will give viewers a look into the final season.

There will be some big changes in the upcoming season. In an interview with Entertainment Weekly, MTV’s Executive Vice President of Programming Chris Linn stated that in this last season ofJersey Shore, Nicole “Snooki” Polizzi will move out of the house.

“She moved into a place right next door but she still spent the bulk of her time in the main house,” said Linn. “But the cast also came over to her place so it gave us another place to go to. She’s very much present in this season.”

Many have pointed to the huge change in the life of one Jersey Shore cast members was at the center of this decision. Polizzi, and her fiancé Jionni LaValle, welcomed their first child, Lorenzo LaValle, only four days before MTV reported the show’s cancellation.

However, in the same interview with Entertainment Weekly, Linn stated that it seemed like the right time to end the show not only because of Snooki’s pregnancy, but because of “the relationships” of the seven other cast members that were developing over the last five seasons.

With all these changes, some have expected that this season of Jersey Shore may feature the same debauchery that fans have come to love. But MTV ensures that there is still enough, tanning, partying, and catfights to satisfy everyone.

Even with the show ending, the Jersey Shore cast members will either be busy in television or go back to their ordinary lives.

Jersey Shore spinoff Snooki & J-Woww was recently renewed for another season but it is unclear how the show will work out with baby Lorenzo. Questions about LaValle’s role in the show have also been brought up.

Paul DelVecchio, better known as DJ Pauly D, will continue with his own spinoff show entitled The Pauly D Project while the show’s infamous couple Sammi and Ronnie have decided to move-in together.