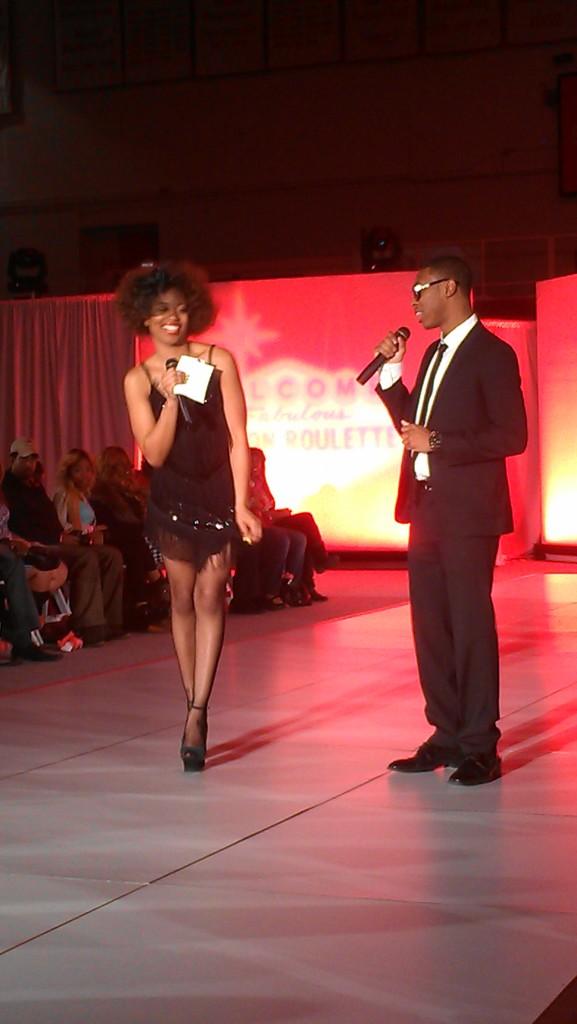 This year’s Spring Week was a blast, but the Fashion Club’s Fashion Show really stood out and was not an event to be missed. Thursday night, students, alumni and non-Johnnies poured into Carnesecca Arena to see unique designers share their lines and the beautiful models strut their stuff. As I sat in the press section I must say that the crowd looked as good as the models walking down the runway.

Two charismatic students hosted the show: Liane Robinson, the former president of Haraya and JaShaun Roebuck, the president of Kappa Alpha Psi Fraternity, Inc. Robinson and Roebuck kept the flow of the event going smoothly while the models were equally impressive.

The models started the show off with a quick dance number that lead right into the fight line, MYM Collection. The next was the Creative Era which showcased a line of detailed bowties that were made of out fabric and wire.

The following designer, Megan Mullings, is a current St. John’s freshman who showcased her line, MeganAndre. Her collection was filled with intricately cut dresses and swing skirts, a very flirty and sophisticated line.

Another collection, Overdose On Fame, was a memorable collection and one of my favorites. The garments in this collection were colorful and
beautifully detailed. It was almost as though the models were wearing paintings instead of clothing or maybe a mixture of both. The Model Cocaine line featured a lot of cutouts and sheer coverings, showing a lot of skin.

One collection, Austin Paul, featured kaleidoscope-like prints. The line also featured designs that can only be described as “masculine florals” with pale hues but colorful all the same.

Fabric Twins closed the show with its “shimmery,” sequin-filled pieces that also featured a lot of cutouts, one being worn by Liane herself that caused a bit of an uproar in the best way possible.

Midway into the show, the E-board of the Fashion Club presented a check to Katharine Polk, the representative of a non-profit organization called
Designers Against AIDS. The DAA is a project that was launched in 2004 to bring awareness to AIDS by elements from the media (music, fashion, design, arts, sports, film and celebrities, etc.). It was a touching moment for the E-board and it was obvious that they appreciate being recognized by the international organization and having a deserving designer there to accept the check.

“We have been trying to reach out to you guys for years,” President Dhajja Patten said to Polk, choking back tears.

The designers were so talented and inspirational (I might snag myself a few pieces), but the models really stole the show. Those students really did an amazing job on organizing a great performance. Definitely a great way to bring Spring Week and the end of the semester to a close.