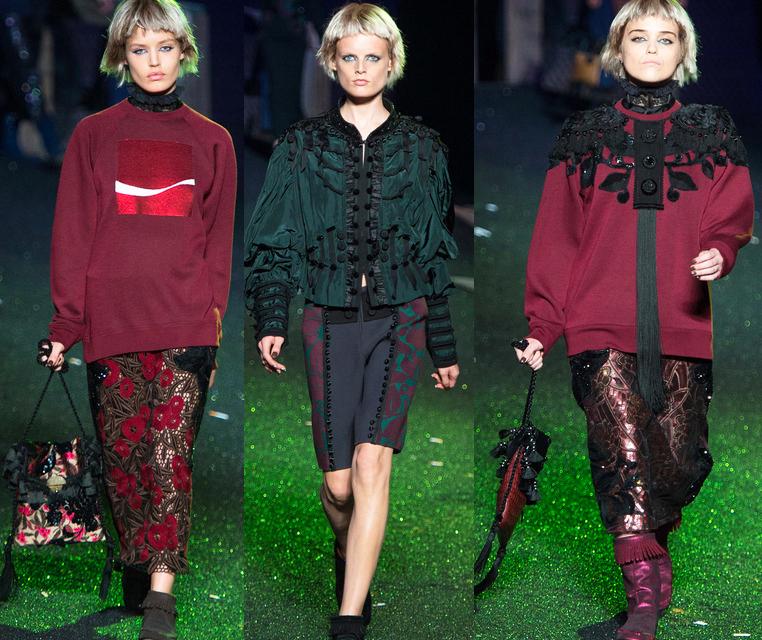 New York Fashion Week has promptly come to an end. Having presented over 100 shows, the event went through New York like a fashion whirlwind.
Gathered from the chatter among the blogosphere, there seemed to be a wave of disappointment crashing alongside a wave of praise, which gave an overall mixed vibe for the spring/summer season.

In contrast, I found a few collections to have brought a surprisingly fresh feel to the often floral plastered spring/summer season.

Thom Browne’s collection had a handful of futuristic, minimalistic looks, mastering the art of broad and structured shoulders and tailored couture cuts.

Browne brought “theatre meets couture” into this season, seamlessly sewing 18th century Victorian theme with a modern, theatrical twist. There was a whisked theme of insanity and institutionalization, especially with the all white theme. The contrast in fabrics was intriguing, chiffon and lace, dresses with caged arms and barbed skirts; the women were appropriately confined.

The models sported plain, white powdered faces, with a tint of deviance, adorned with perfectly smudged red lipstick, fitting with the psychiatric theme.

Browne was successful in bringing a theatrical complex into a season which tends to sport floral prints and pastels.

Also serving a Victorian theme, Marc Jacobs brought forth a cool divergence from the traditional steam-punk, and put a contemporary “beachy frat” spin on it, coordinating justly with the runway set.

“It’s more of a weird frat party, Burning Man, shores-of-Gotham City sort of beach scene,” designer Marc Jacobs told Style.com last week. “It’s a lovely nightmare, or it was for me anyway. I didn’t want the cliché of spring and summer, I wanted it to be about girls who have no problem coming to work in a Victorian gown and Birkenstocks.”

With black, broad-shouldered coats adorned with paneled embroidery and tassels paired with island themed floral-printed board shorts, and dresses alike, the models’ smug faces integrated well with the coolness factor and ardorous sensation in the room. The blunt cuts on the sandy blonde wigs paired nicely with the dark hues, mainly consisting of navy, maroon, emerald, brown and black which complimented the island theme, while in keeping with spring tradition.

With some designers breaking the stereotypical mold of the spring/summer season, the record has been set straight that florals and pastels don’t necessarily have to be paired for a successful and artful presentation. Many designers, such as Proenza Schouler and Alexander Wang, who played with minimalism, logos, and cheeky vibes, and Proenza Schouler, who used tailored and pleated pants, and structured coats as an opportunity to play around with textures, and minimalism with structured elegance.