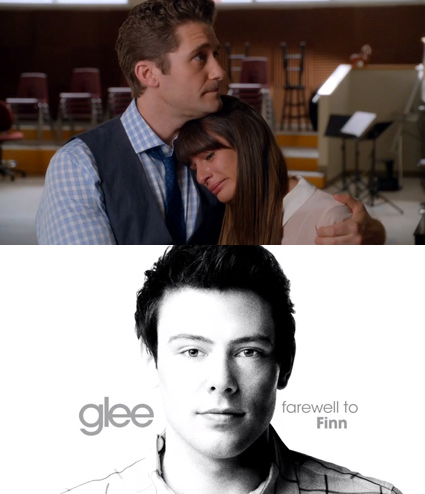 Thursday night’s episode of Glee addressed the death of actor Cory Monteith, who played Finn Hudson. It was one of the most emotional episodes since the series debuted in 2009.

It was tough to watch the cast perform their six solo songs, knowing their emotions were genuine from start to finish. Several former cast regulars opened the heartbreaking episode with the popular song “Seasons of Love” from the Broadway play “Rent.” Mr. Schuester, the Glee club moderator, tells everyone they will be singing songs all week to honor Finn. Mercedes doesn’t hesitate to get up and sing her own version of  “Stand By Me,” a song that Finn sang in season one.

The most moving scene came when Finn’s mother, stepfather and Kurt reminisce about Finn in his room.

They go through all of his belongings and cry as they remembered the times they spent with him.. Keeping a dry eye during the scene was impossible, to say the least.

Puck, a character that Glee hasn’t seen in a while, shows the most anger after Finn’s death. For the first time, we see the rebellious character cry for the first time while sits down the former
football coach, Beast.

He then continues to steal a memorial tree and is even accused of snatching Finn’s football jacket. It was revealed at the end of the episode that it was Mr. Schuster who really stole the jacket.

Real life girlfriend of Monteith Lea Michele who plays Rachel on the show performed a powerful number “What Makes You Feel My Love,” which she often used to sing with Finn in the car on the show. This was a very touching, tear-jerking performance.

The episode ended with Mr. Schue hanging up a picture of Finn in the choir room. We then see Mr. Schue break down in his wife’s arms, holding Finn’s letterman jacket. As the screen faded to black, Cory Monteith’s name appeared.

It was a dramatic ending, but the episode was a wonderful commemoration of Cory Monteith and his time spent on playing Finn Hudson on “Glee.”