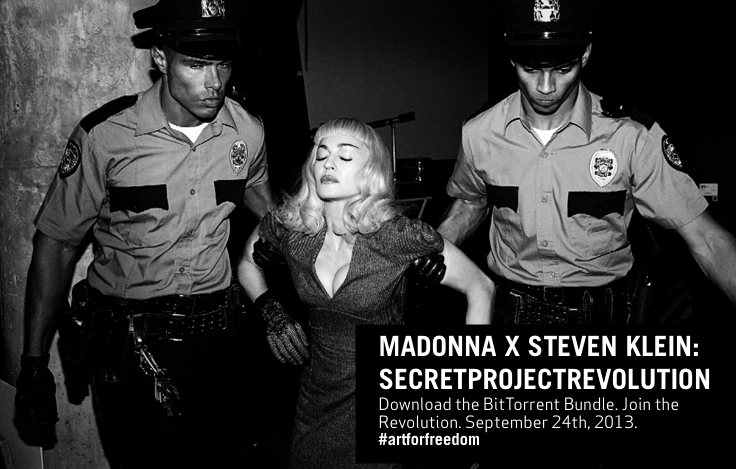 Madonna released the “secretprojectrevolution” on her site artforfreedom.com last month.  In collaboration with Steven Klein, she created a 17-minute video to kick-start a revolution.

The video is described by Huffington Post as “a Vogue photo shoot coming to life,” and I agree.

The setting of a prison is heavily glamorized but gritty at times to emphasize her overarching theme of art for freedom. The prison’s clearly inhibiting setting is staged for dancers and actors to stand out as the video progresses.

One of the main issues brought up in the video is the suppression of creativity. This is brought forth first by Madonna shooting various characters in a scene, rendering them unable to express themselves.  The “I Have A Dream” speech by Martin Luther King, Jr. is eerily played in the background while a dancer performs a hip-hop piece along with a guy aggressively breaking behind bars to clearly present Madonna’s call for emancipation.

Other issues Madonna voices while gripping the bars of her cell are religion being used to treat someone badly and the growing trend of identical inmates filling the world instead of individuals. The last issue she brings up is equality without prosecution due to a person’s race, sex, sexuality, weight, class or religion. Madonna makes this clear when she points out that many people will not take her declaration of starting a revolution because she seriously is a blonde, white, women, who’s commonly viewed as racy in her videos and performances.

But Madonna isn’t here to start a trend or to make you tweet about her and promote her album. She wants you to define freedom for yourself and to have the courage to do what you want, no matter how weird or simple, through dance, poetry, song or any other talent you may have. It’s nice to see Madonna, one of the first people to find fame for her “antics,” bring the attention back to its original purpose, as the video reverses and everyone who was once shot is whole again.