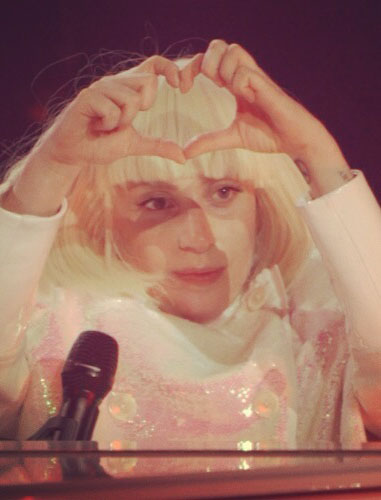 Five short years ago, singer/song-writer Lady Gaga took over the pop music scene with her debut album “The Fame.”

And a year later, “The Fame Monster,” still produces hit after hit to the point that people cannot avoid her music on every radio station and playing in every store without or reading about her in every magazine.

But after the release of her second studio album, which sold one million copies in a week, “Born This Way,” struggled with radio play and charting.

Now, hot on the heels of the release of her third studio album, “ARTPOP,” due out November 11, the same Lady is clawing to get the mainstream world back in the palm of her hands. After tearing her hip on tour and staying out of the spotlight for over year, she has taken a fall but isn’t gone for good.

Everything about the album is carefully curated to portray a confection of both art and pop, starting with the word play of “ARTPOP” stemming from her self-acclaimed muse, Andy Warhol’s “pop art” concept. Lady Gaga also collaborated with artist Jeff Koons for the album cover, which features the real-life statue of Gaga he created holding his most notable work, the gazing ball. Following suit, the track list is specifically ordered to go from “art” to “pop” in both concept and production.

The first track off of “ARTPOP,” titled “Aura,” was featured in the movie she starred in “Machete Kills.” “I killed my former and/left her in the trunk on highway 10/put the knife under the hood, if you find it/send it straight to Hollywood,” is followed by manic laughter in cohesion with the beats. Produced by Zedd and Infected Mushroom, Gaga reintroduces herself to the listener showing them what’s “behind her aura,” by metaphorically stripping away her outfits and wigs through theatrical lyrics and mesmerizing beats, leaving them to be interpreted on their own.

“Venus,” the second song off the record, was set to be the official second single following “Applause,” but was promptly switched with the R&B track. “Do What U Want” featuring R. Kelly, after it’s initial success when released as a promotional single.

“Venus” is in line with the “art in pop” theme by referencing the Botticelli painting of “The Birth of Venus,” but with a twist. This is one of the strongest tracks on the album and is also the first track she has produced by herself. With Bowie-esque vibes and subtle sexual innuendos, Gaga captivates and takes you to her planet.

“Do What U Want,” featuring R. Kelly and “Jewels & Drugs,” feat. T.I., Too $hort and Twista, show her urban diversity through hip-hop and R&B on her mainly pop album.

“Sexxx Dreams,” is a fun, imaginative track about the unspoken desire between two minds. The beats mirror the fantasy feel, with a strong build-up and release. Leaving little to the imagination, it’s one of the most honest tracks on the album, aside from “Dope” and “Gypsy.”

“Dope” is a piano ballad with an influx of harmonizing and satisfying synth-sounds. Her vocals on this track are among the strongest; as she seems to undoubtedly shine when left alone in a room with her voice and a piano. Lyrically, Gaga brings you through an emotional journey of her struggles with addiction and how love is her new addiction, as opposed to substances.

Other notable tracks on the album are “Manicure” which serves a super fun punk-rock infused pop song is being described by Billboard as an “obvious choice for a future single,” to which I agree. “Donatella,” “Mary Jane Holland” and “Swine” are a trifecta of club bangers with fun, heavy beats that vibrates to the core. “Fashion!” produced by Will.i.am, “G.U.Y.” and “Artpop,” are among the slower songs on the album but the productions on both are massive and equally great.

Overall the album brings the listener through the artistic journey Gaga went through the two long years she worked on the album. It’s clear her love for showbiz is authentic, holding truth in the lyric, “I just love the music, not the bling.”