Best Man Holiday: A sequel for the season 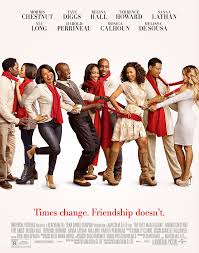 Nearly 15 years after its original release in 1999, Spike Lee’s writer and director cousin, Malcolm D. Lee, brings back his all-star cast for the “Best Man Holiday.” Picking up right where it ended over a decade and a half ago, the film answers many questions fans may have been wondering through the years.

Straying far away from its title name, this movie has very little do with an actual “Best Man.”

The amount of subliminal shade being thrown throughout the movie and knife-cutting tension makes it impossible for someone to walk away from the film truly satisfied if they didn’t see the first one. Not saying that it is mandatory, but the true essence and meaning of the story will not be fully understood.

Coming in at the box as the No. 1 comedy in America, many would expect a hilarious movie, but this is not the case. Straying far from its original comic roots, this movie isn’t your typical predictable sequel.

Many thought, when initially hearing of a second movie, that it would be something light-hearted with lots of laughter and a few tears. However, what I was given was a film that warmed my soul through its unique story line of the lives of affluent African-Americans coming together as adults mending their battered college relationships.

Lee’s script shows real complexity as it focuses on every aspect of adult life. From financial issues to marital problems, it is all addressed in this holiday film.

The script may have been well-thought out with tons of plot twists and minor
stories, but it is the phenomenal acting from the cast that brings it in for the home run.

Morris Chestnut shines as Lance Sullivan, a soon to be retired Giants running back, and Taye Diggs as Harper Stewart, a struggling writer focusing on his career and rocky marriage with Robin (Sanaa Lathan). We get to see our favorite college students settled into adulthood.

Reprising her role as Jordan Armstrong, actress Nia Long spices it up with an on screen relationship with good looker and charmer, Eddie Cibrian who plays Brian McDonald.

Harold Perrineau as Julian Murch and Regina Hall as Candace Sparks deal with the challenges of her exotic dancer past as they further their careers and raise a family.

While characters Shelby (Melissa de Sousa) and Quentin, played by Oscar nominee Terrance Howard, bring sexyness and sassiness to the movie, it
was Monica Calhoun that stole the show with her stellar performance as Mia
Sullivan, the heart of the group.

As the group of dysfunctional and
dynamic friends gathers during Christmas weekend, they share with the world a powerful message.

No matter how big or small the issue these characters face, they never fail
to believe. Truly living up to its title of “Best Man Holiday,” this film reminds us of the reason for the season. Laughter will fill the air and tears will be seen throughout the room, making this movie a must-see during the holiday season.