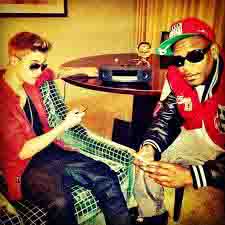 From Brazilian woman to on-and-off break-ups with celebrity Selena Gomez, Justin Bieber has been under constant ridicule regarding his current relationship situation and new found maturity, yet he hasn’t let it stop him from making music.

With this song it’s clear Bieber wants his fans and media to know he’s grown up and can make sexual music if he so pleases.

“PYD” is said to stand for “Put You Down” and after listening,  Bieber makes it pretty clear he’s going to do just that. As expected with the self-proclaimed “King of R&B”, R.Kelly, “PYD” is both sensual and sexual.

“PYD” opens with Justin Bieber telling his Beliebers all of the places he wants to “put them down”, “From the door to the wall Coffee table girl get ready I’mma put you down.” This song and the rest of Bieber’s “Music Monday’s” series is now available on iTunes.