Nostalgia with modern twists at NYFW 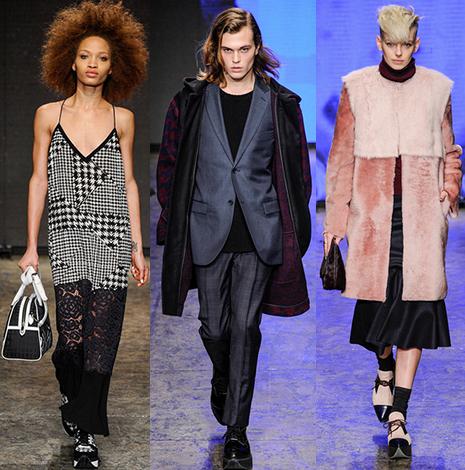 Despite cold weather and a fair amount of snow, New York Fashion Week trudged on earlier this month and delivered a new crop of trends for the upcoming fall/winter season.

Though looking forward to another season of polar vortexes and blizzards may not seem appealing at the moment, designers showed great clothes and trends that won’t make it so bad.

One reoccurring item were fur coats. They appeared on runways less like the pimp coats of the 90s and more streamlined. Jill Stuart and Milly kept the trend light and feminine with soft colors from white to a dusty purple. On the opposite side, Band of Outsiders and Hervé Léger by Max Azria gave off a more edgy feel with biker jackets and dark stripes.

The trend of loose-fitting clothes has also resurfaced from the 90s. The DKNY show was the show that displayed this really well.  With the eclectic cast of half models, half people pulled from the streets, the show was already notable, but her display of loose, edgy, urban sportswear is bound to catch on. From the over-sized coats to the flowing skirts, the looks were in equal parts interesting and wearable.

Another designer commonly noted for creating wearable clothes, Alexander Wang, also had a more loose fitting style to each look.

Unlike Donna Karen’s overall loose, relaxed feel, Wang opted for a more boxy structure in his outerwear, sweaters and shorts, only broken by baggy pants.

The trends of graphic tops and nerd paraphernalia seem to be staying around, with both popping up at a few separate shows. Rodarte, always a place where you can find something quirky, closed their show with dresses displaying images of Luke Skywalker, C3PO, the Death Star and even Yoda.

The “Star Wars” theme even showed up in the Preen show during London Fashion Week with the repeated motif of Darth Vader’s helmet.  Graphics got equally as interesting.

At the Opening Ceremony show hands were the clear inspiration. The show included several garments with hands as the repeated pattern. Other looks displayed prints that mimicked the flowing lines of fingerprints. When fall and winter come around it is easy for most people to fall into wearing mostly black or gray. This season designers tried to brighten the uniform of dark clothes with a pop of color. Both Diane Von Furstenberg’s and Rag and Bone’s show featured red and purples to battle a monotonous feel to the collection.

Overall, New York Fashion Week has foreshadowed to an upcoming season of reemerging trends from the 90s and a bright, fun twist to modern styles.