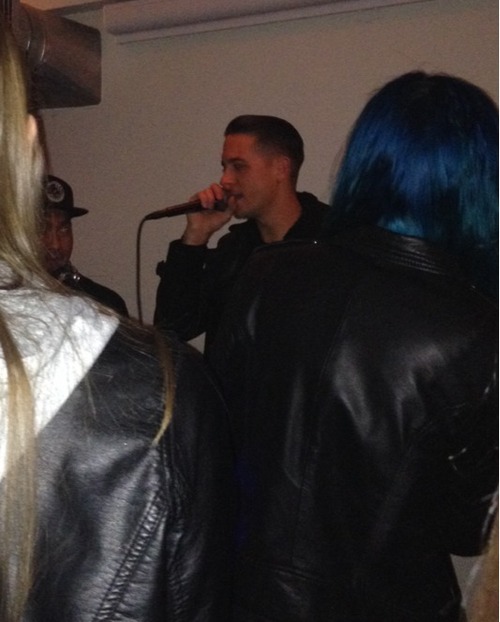 Emerging San Francisco rapper G-Eazy held a low-profile listening party for his new album “These Things Happen” to the glee of many local fans last Tuesday night. Sponsored by Spotify and featuring DJs from Hot 97.5, the party was an intimate way for fans to meet and greet G-Eazy before his tour makes its way to New York next month.

Gerald Gallum, better known as G-Eazy, has been working the scene with a unique rap style reminiscent of 1950’s pop and “dapper look.”

Participating in events like SXSW and joining fellow rapper Hoodie Allen on a couple of his tours, he has gained more popularity and fans throughout the country.

His appearance on the 2012 Warped Tour boosted his status as an up-and-coming force in the rap world, and many stars like A$AP Rocky and Drake have taken notice.

Critics have taken a liking to his style and reiterate their emphasis on keeping up with him throughout his career.

His most recent These Things Happen Tour with opener Rockie Fresh, set to take off on Feb. 21, may prove to be his most successful so far, with dates like San Francisco, Seattle and Boston sold out. New York fans, however, found themselves waiting in 18 degree weather to maybe be lucky enough to enter the exclusive event. Once inside, G-Eazy’s 6’4” presence was hard to miss as he casually made his way through the crowd to greet people and thank them for attending the event.

There would be no performances from him tonight, but it was clear the night would be all about him, his music and how this album would solidify his presence in the rap world.

The DJ pumped out the new songs into a house party-like atmosphere as people danced and got to know G-Eazy’s new sound.

The mix of his new and old songs kept the party alive. Fans were able to talk to “G” and get pictures, autographs, and share the experience with other fans.  Skizzy Mars, a New York City rapper, also attended the event and later posed with him in a picture with his close friend on Instagram.

The whole night was an enjoyable experience overall, but what struck people throughout the room most about G-Eazy was just how humble he was the whole night.

During a night all about you, with your own sound pumping through speakers and people singing along to every lyric, you’d expect to find yourself pumped up on pride and arrogance.

G-Eazy was different in that he genuinely thanked fans for coming out to support him, shook hands with old friends and gave advice to other emerging rappers in the room. Most of the time, you could find him chatting up in a small group of two or three people, smiling and always listening. While the album’s release date has yet to be announced, the tour is sure to be amazing and G-Eazy’s future is certainly brighter than ever.