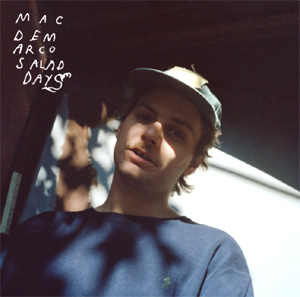 If Mac Demarco’s first record, the aptly titled “2” proved anything, it was that Demarco had a true penchant for penning funk-heavy tunes ripe with jangling guitars and a minimal rhythm section to support his smooth, mellow vocals. In his latest LP, Demarco knocks the metronome down a notch on “Salad Days.”

The record takes the aesthetic of “2” but heavily refined in order to allot space for more laid-back open jams between the flanger-laden guitars and more complex arrangements on tracks like “Let My Baby Stay”. Hailing from British Columbia, Demarco born Vernor Winfield McBriare Smith IV now calls his studio in Bed-Stuy, Brooklyn home.

At 23 years old, the singer/songwriter has already released two LPs, multiple EPs, and even managed to sell out an upcoming show at New York’s own Webster Hall. The album was released under Brooklyn based label Captured Tracks, with artists such as DIIV and Beach Fossils on their roster. Demarco, who was under some label pressure for his follow up LP, initially was reluctant to record the more accessible track “Let Her Go.”

Equipment-wise, he records and performs on an off-brand guitar he purchased at age sixteen for 30 dollars. The distinctive funk vibe of his guitar comes from a “chorus effect he believes no serious musician would ever use.”

Some tracks such as Notorious for his slacker/stoner aesthetic, the Canadian singer fine-tunes his distinctive style of hazy crooning over flourishes of guitars, sequences of backbeat drums and hypnotic bass grooves on “Salad Days.”