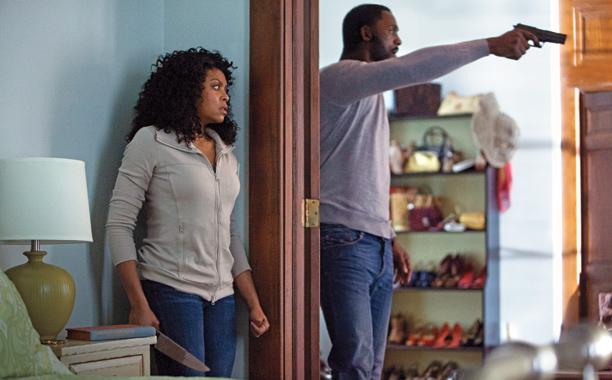 For some, there’s a cold sweat that overtakes the body when a stranger walks by. For others, there is a churning in their stomach. These are signs the bodies give us when there’s possible danger, when something is telling us to get out now.  These are just two things Terri experienced when her best friend vanishes from her home without even a mention of goodbye.

When Terri, a stay-at-home mother of two, played by Taraji P. Henson, extends a helping hand to Colin (Idris Elba), a neighbor in need, her world almost crashes in on itself. The movie “No Good Deed” begins to come alive on a stormy night with her husband away for his father’s birthday. Colin crashes his car and needs to get help. He’s not beaten up too badly, but needs to get home, and the wreck up the road isn’t getting him anywhere. He finds Terri’s home and asks if he can use her phone to wait for the tow truck. However, Terri ends up feeling so bad for Colin having to stand in the downpour that she not only allows him to let the tow truck pick him up from her home, she invites him in with her two small children inside.

Colin conveniently fails to admit that he is convicted of manslaughter for the deaths of six people, five of whom were women. He also fails to admit that he broke free from transport back to jail after he was denied parole because he, as one of the board members puts it, is a “malignant narcissist.” Not to mention that he killed his ex-fianceé the same day, but being the great liar that he is due to his mental state, Colin comes off as an okay guy, and makes a wary Terri feel somewhat okay with letting him in.

“No Good Deed” then follows Terri as she does her best to avoid being his next victim. Henson does a great job of displaying fear while knowing she needs to keep a level head. Her character does her best to ensure the safety of her children. She begs Colin to take her life and spare her children. However, when Colin insists that the children be involved, she makes sure to tell them that they’re taking a trip or having a sleepover to shield them from the danger.

Elba plays the part of a crazed killer well. The inflection is more in his voice than an expression on his face, but that helps the creation of jump-scares if anything. It is hard to believe him in this role however. He’s not just a killer who wants to get revenge on his ex or had bad run-ins with a few unfortunate people. His character is supposed to be mentally ill. His narcissism is supposed to make him completely incapable of hearing any kind of criticism or feel any rejection, which in turn causes him to lash out and kill at the first inkling of these feelings. It makes sense for Colin to look handsome and ‘all there’ when he’s trying to put on a front for Terri, but when all masks are off, nothing about his character goes the extra mile to make the audience really believe that Colin is mentally off.

“No Good Deed” isn’t a scary movie in a typical sense. While there are a number of jump-scares put in place because of the storm and car alarms constantly going off, this can be considered as more of a psychological thriller. It’s very easy to become emotionally involved with Terri; it’s easy to look out for her and her kids and root for her when she gains the advantage. While the movie takes close to an hour to really get engaging, most of what is shown in the beginning really is important towards the end. This movie may not leave you on the edge of your seat, but it can certainly leave you in a state of constant worry.