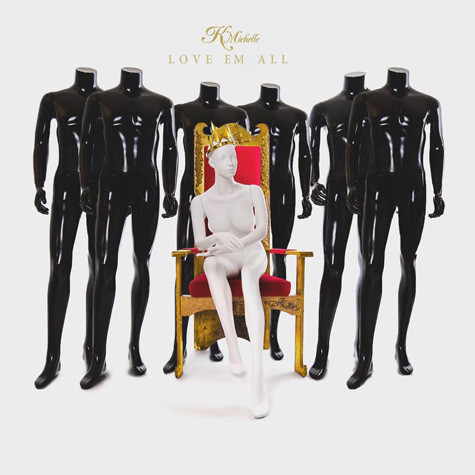 It definitely has been one hell of a ride for R&B singer K. Michelle. It seems the former reality star just cant stay away from industry drama.  From Twitter wars with Lil’ Kim and Perez Hilton, to failed relationships, R&B fans all around are wondering when the “VSOP” singer will leave the social media drama behind and get back to the music.

With the release of her debut album successfully under her belt, the southern songstress is ready to give her fans another round of greatness. The R&B singer shared a heavy ballad, “Love Em All,” online earlier this week, creating a lot of  buzz. The track was taken from her forthcoming album, “#AWBAH,” yet to be released.

The power of this song is definitely one I could jam to in the car, which is not always found in radio R&B. K. Michelle, sings about loving multiple men and says, “sex is irrelevant” at one point. Many are categorizing this as a pop-rock ballad, a change from what fans have come to expect from this powerhouse diva.

This heartbreaker anthem is definitely a great one to end the summer with and kick off a great fall season. With lyrics like “I broke another heart today / And I didn’t care, I just walked away / ‘Cause they think I love ‘em, but I love ‘em all,” fans will be singing along in no time.

K. Michelle is putting the finishing touches on her sophomore album, which will feature the likes of Eric Hudson, Pop & Oak, Timothy Bloom and a surprise country duet. It definitely is a new direction, but I believe it will turn heads. She plans to release the second single, “Maybe I Should Call,” in the next two weeks but previewed the song online for her fans.

For now we can all enjoy this amazing heart breaker anthem, even though “cuffing season” may be right around the corner. The beat alone just makes you want to jam with your girls; she definitely flips the script by giving men a taste of their own medicine and being the heartbreaker instead of the heartbroken. I know there are a lot of women out there that can relate to this song and even if you can’t it is still a great song to listen to. The album artwork for the new single speaks volumes, as does the song itself.

The verdict is still out on whether K. Michelle’s new album will drop the end of this year or early 2015, but keep a close ear online for unexpected singles. Until then, take a listen to the new K. Michelle on the scene and if you get a chance, replay the oldies but goodies of this up and coming star.