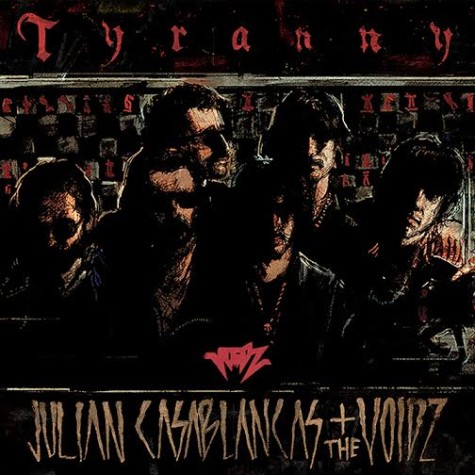 Taking a break from his main project, The Strokes’ lead singer Julian Casablancas has been touring and recording with a new group, The Voidz. Performing only a couple shows earlier this year before the album dropped, the band’s set lists included tracks from Casablancas’ last solo album, 2009’s “Phrazes for the Young,” Daft Punk collaborations, and even some tracks from The Strokes.

However, the main portion of their sets are from their upcoming release “Tyranny.” The record shows how Casablancas shifts further from his main group, and even distances himself even more from his last solo effort.

In his previous venture, we saw Casablancas looking significantly less energetic in performances than we did in earlier Strokes shows. In the studio, it was only Casablancas and producer James Lader with contributions from Mike Mogis and Nate Walcott of Bright Eyes. The live setup was entirely different, with multiple guitarists, keyboard players and even a young Danielle Haim on percussion.

On “Tyranny,” the production and performance strictly comes from his backing band, The Voidz. As seen through his more recent work, the NYC singer makes more use of his falsetto vocals rather than the raspy baritone seen on “Is this It” and “Room On Fire.”

Sonically, the album is more akin to “Comedown Machine” than “Phrazes for the Young,” but still takes Casablancas to an entirely new level. Laden with more experimental sounds and textures, the most notable track is the 11-minute culmination of modern electronica and ‘80s hard rock in “Human Sadness.” With a wide variety of reference points, the band even takes influence from break beat music on “Where No Eagles Fly,” a song that sounds like an outtake from the Fight Club soundtrack.

The album gets into more unconventional tracks on “Father Electricity,” which features a heavy bossanova groove amongst a myriad of synths and guitars. “Business Dog” takes the record in a more punk direction; the album features more of the diverse instrumental arrangements that overtake Casablancas vocal melody.

On tracks like “Xerox,” the main composition centers around loopy guitars over avant-garde drum samples with heavily filtered vocals, almost to the point where it removes his stylized way of singing entirely. As a whole, the record is much darker, stylized and far surpasses his previous solo effort on the levels of technicality and crafting lush soundscapes rather than pop tracks.

Initially, critics were mixed over some of The Voidz performances earlier this year, including their disastrous set at SXSW, which saw Casablancas’ struggle to reach the falsetto notes successfully, despite using vocal filters and vocoder/auto-tune. Where “Phrazes for the Young” was met with cynicism over Casablancas’ lack of effort or interest in terms of vocal delivery and songwriting, “Tyranny” shows a singer-songwriter getting further into their career and not being overtly focused on trying to replicate the former success of their main group. The band makes their homecoming return to NYC at Manhattan Center’s Hammerstein Ballroom on Nov. 25, and their debut record “Tyranny” is released on Sept. 23.