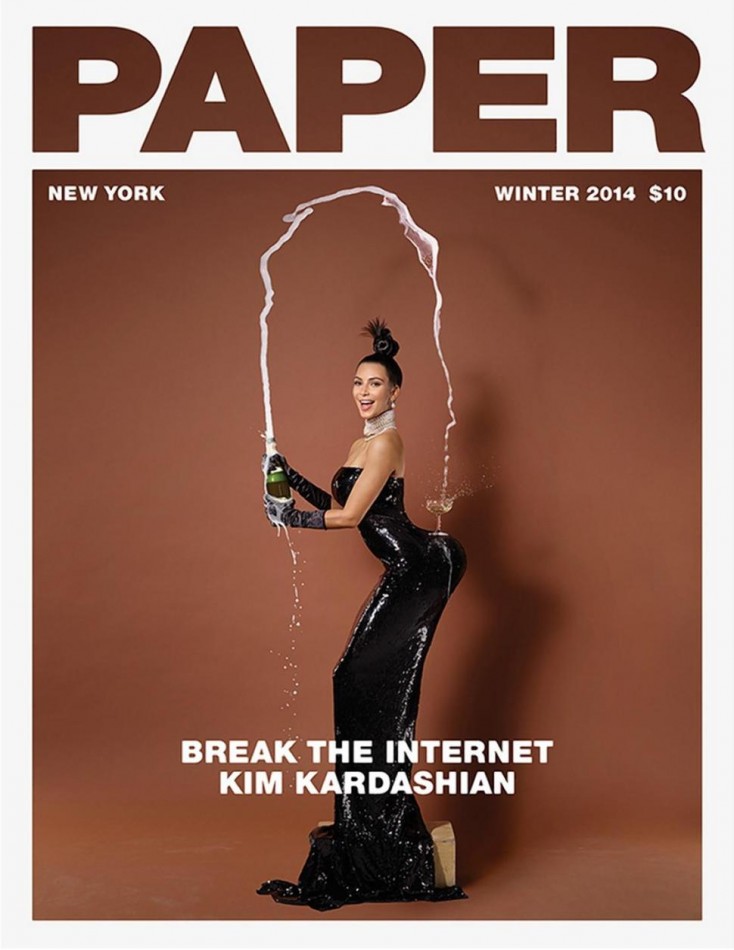 Kim Kardashian graced the cover of Paper magazine, but it's the pictures inside that have got the people talking.

Paper Magazine released their December cover of Kim Kardashian. It instantly became the number one talking point and the launching pad for hundreds of memes. The cover features Kim holding a bottle of champagne bursting in an arc landing right into a glass that’s balanced on her butt. The other pictures in the spread are of her taking off her dress, including one of her butt and a full-frontal shot. Paper brought in the French photographer Jean-Paul Goude, to recreate a photo he took in 1976 with Kim as the model.

All of the photos have elicited a wide variety and abundance of responses. On the magazine’s side, they have enjoyed an increase in followers on all of their social media sites, and it seems they will have a very high circulation rate for this issue. Though the goal may have been to #Breaktheinternet, the magazine has definitely achieved the goal of establishing their presence on the Internet.

As far as celebrity opinions go, the most notable is Naya Rivera’s comment “I normally don’t. But … you’re someone’s mother…” when Kim Instagrammed the exclusive cover with the shot of her revealing her posterior.  The common response to Naya from various commenters is that being a mother doesn’t mean you’re not a person anymore and they don’t have to give up who they are. Other fans slammed Rivera saying she was simply a copycat of Kim.  On Nov. 13, Rivera posted a picture of her moving her hand to cover her mouth, an action of regret, with the caption #Instagramgotmeintrouble.

Others believe the issues are much deeper than the Kardashian simply being nude. Many sites have said that the cover is a display of how black women are treated in the media. Instead of focusing on Kim, they bring the attention to revisiting Jean-Paul Goude’s photography. When revisiting the champagne picture’s inspiration, the picture of a nude, black woman in the same position as Kim, many have connected it to Saartjie Baartman. Baartman was KhoiKhoi woman who was part of a freak show where her body was on display for everyone to see. Many went to see her because of her large rear-end, making her quite famous in the 19th century.  She has been brought into this conversation because something so similar being used for entertainment may be a glorification racism, oppression and misogyny that has been associated with the freak show.  The original photo comes from Goude’s book entitled “Jungle Fever.”

Many of Goude’s previous photos include his then-girlfriend Grace Jones including one where she is in a cage bearing her teeth. As Blue Telusma puts it in her opinion piece for the Grio:

“Back in 1982 (before shows like Law & Order: SVU taught folks how to identify the subtleties of abuse), when this book came out, many were dazzled by his pictures of Grace Jones and, since she and Goude were lovers, assumed that when he took shots of her in a cage, on all fours bearing her teeth like a caged animal – it was ok.

Because lovers don’t ever disrespect each other right?”

Kim has not commented on any of the opinions that have been made.  Drew Elliot, Paper Magazine’s Chief Creative Officer told Adweek that Kim was familiar with Goude’s work and very excited to work with him for the first time.

Whatever the goal may have been, the cover has launched discussion of maternity, female nudity, abuse and representation of minorities.