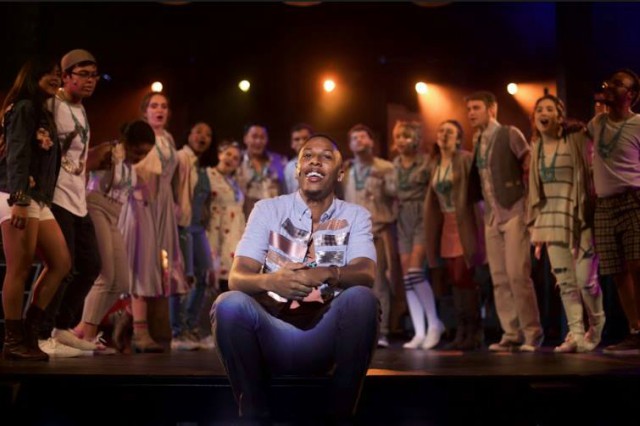 Bill Powell stars as Jesus in the Chappell Players' rendition of "Godspell."

The beginning of Kanye West’s “Fade” echoes over an industrial back alley as a group of partiers spills out onto the stage. The revelry and drinking is soon interrupted by a newcomer, John the Baptist, who speaks of a Savior who will lead them to Heaven if they change their immoral ways. Thus begins the musical “Godspell,” performed by the Chappell Players Theater Group in the Little Theater.

The musical is a sung collection of parables from the Bible, most of which were pulled from the Gospel of Matthew. The book for the show was written by John Michael Tebelak, with music and lyrics by Stephen Schwartz. “Godspell” was first performed in 1971 and later premiered on Broadway in 1976.

In the Chappell Players’ rendition of the show, the recently baptized followers of Jesus are distinguished with teal beaded necklaces and wide eyes, ready to absorb the teachings their newfound Savior has to offer. As Jesus shares the stories of the Bible with them, they scramble to both act them out and incorporate the lessons into their own lives.

The cast often accompanied the ancient tales with multiple pop culture references, including one well-timed Donald Trump impression, to help keep the story relevant and engaging for the audience.

Senior Bill Powell portrays Jesus with a refined air of authority. Often with his hands clasped behind his back, he commands the attention of his followers in his strong voice and infectious charisma.

Powell also demonstrates an impressive vocal power in both upbeat songs such as “Save the People” and the slower ballad “Beautiful City.”

Senior Brandon Lisama is able to perform as both John the Baptist and Judas by distinguishing his different acting choices between the two characters. As John the Baptist, he eagerly reinforces what Jesus is teaching with wide eyes and an encouraging smile. Lisama shakes and refuses to look Jesus in the face, however, when he transitions to the betraying Judas.

Each character in the ensemble of Jesus’ followers stands out with their own unique personality. Although each ensemble member is given their own time to shine when acting out Jesus’ parables, the entire group is also able to complement one another and work together in the large company numbers.

Freshman Savanah Sanchez worked on the production as a spotlight operator, and she was grateful to have “Godspell” as her first collegiate theater experience.

“I really appreciate the Chappell Players inviting me and letting me participate in the theater program, which has always been a big part of my life and I was glad to be apart of it here at St. John’s,” she said.

She also commented on how the musical helped to enforce St. John’s mission as a Catholic university. “I feel that ‘Godspell’ was a good first show of the season since it really represents how important Catholicism is to much of the student body here.”

“I thought the show was really amazing!” audience member Erin Shoul said. “Considering that they only put the show together in about three weeks, I think that the unity of the cast and crew was very impressive.”

The show concluded on October 15. The Chappell Players are continuing their season with their annual Cabaret show “CabaLove,” which will run in the Little Theater November 17-19. Proceeds from the show will be donated to St. John’s Bread and Life mobile soup kitchen.