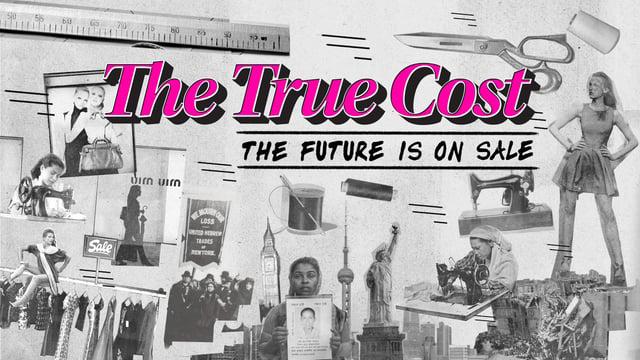 "The True Cost" is a documentary exposing the truth of cheap sweatshop labor.

Have you ever wondered where your clothes came from? Or how your favorite clothing brands comes out with new items each week? No. Well maybe this is something that you should be thinking of. In order to have such great clothing at such low costs, a price must be made.

This is “The True Cost.”

St. John’s for Fair Trade, St. John’s Learning Communities and Catholic Relief Service Ambassadors came together on Monday Oct. 24 to show a screening of the documentary The True Cost. This documentary goes inside the ugly truth behind sweatshop labor and environmental problems in the fashion industry, and how there can be possible solutions.

The film directed by Andrew Morgan goes into a sequence of multiple interviews from journalist, Lucy Siegle, fashion designer, Orsola De Castro, CEO of TAL Group, Roger Group and many more. The documentary shows how fast fashion works, for those that do not know, this film is a great insight that gives you knowledge on what companies such as Forever 21 and H&M do in order to keep up with these new items.

“Instead of two seasons a year, fast fashion made it 52 season a year,” said Siegle.

This film will make you think twice when it comes to buying the next biggest fad, it will bring you a whirlwind of emotions.

Morgan does a great job in making a big impact for the audience as he shows the big explosion in Bangladesh from a factory collapse. There were 931 deaths due to this collapse and that was not the only factory mishap in Bangladesh and in other countries with garment factories.

There is also and interview with a Dhaka garment worker from that had her legs cut off due to a factory collapse. Her own life was put at risk just for the sake of saving money.

In “The True Cost,” you find out so much you wouldn’t have known before, because we are consumed with advertisements for these companies blinded by the truth. This eye opening film lets you feel these women garment workers and the horrid conditions they are in.

Not just garment workers, but even cotton farmers, that is not turned into a factory, as its not just people affected but our very own soil here on Earth.

“The True Cost is a documentary that is a must watch for anyone,” CRS Ambassador, Alexia Dolamakian said. “The average person rarely stops to consider who made their clothes and this document provides a good insight into the tragedies occurring in the clothing industry.”

These people are taken with no regard of their human dignity as they work in horrible condition, all just for the quality of low prices for clothes. Prices for fast fashion has decreased in the last year, which may make us happy, but we are hurting someone by supporting.

Morgan narrates the story behind how sweatshops happened. “In the 1960s, 95% of clothes were made in America.”

This was before companies found a loophole in bringing their corporations to third world countries. But there are many activists who are trying to fight this and bring sustainable and fair trade into the fashion industry. Just like it use to be in the 1960s. If you are one that takes fashion seriously and are environmentally friendly, “The True Cost” is something to definitely get on board. Especially when it comes to finding out the price that is made with your everyday wear.

This film is a true must- watch as it is now shown on Netflix, so if you missed the screening held on campus, be sure to check it on on your own time.