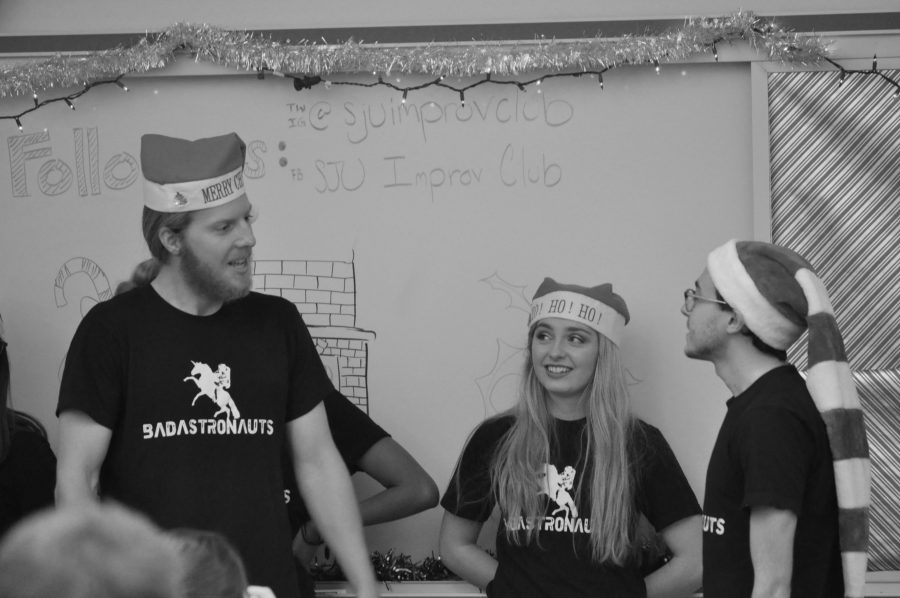 On Thursday Dec. 1, the St. John’s improv group “Bad Astronauts” had a room full of students bursting with laughter for 90 minutes straight. In DAC 407 the crew held their annual holiday show, and began the festive month with a fun and memorable event.

The show began with a series of quick improvised jokes based on the crowd’s suggested opposition, fire and ice. The skit ended with a hit as a member declared that although he’s known as Ice-T, his mixtape is straight fire.

They followed with a long-form game based on a single word that the crowd suggested, “beaver.” The witty lineup of students jumped from beaver cribs on MTV, beavers at the dentist, beavers becoming humans and angry beaver revolts against society.

Another crowd-favorite was a game in which the members had to spontaneously incorporate lines of dialogue that the audience wrote on small slips of paper into a skit. Nothing evokes laughter like a daughter and her father on a fishing trip speaking nonsensical sentences.

Next up was four-square, a game where four members rotated through four unique scenarios based on more audience input. One of these scenarios was a mystery regarding who took the cookie from the cookie jar, a bit that Bad Astronaut Adam Rudy thought was hilarious. After the show he wrote, “My favorite moment in any show is usually whatever the strangest moment of the night is – the moment when all of the rules of improvisation go out the window and some sustained sense of beautiful weirdness takes over. In this show, that moment was Ben [Davis] and Valerie [Blain] doing a scene based on the suggestion ‘mystery.’”

Spontaneity and unpredictability is often the key to success in improv. Rudy acknowledged this in his comment regarding the crazy cookie mystery scene, “I love moments like those. They’re just about the best proof that we’re definitely making this stuff up as we go along, because nobody could plan something like that.”

This type of unpredictable randomness was also seen during the dating game, in which a member successfully guessed two of her three dating candidates, Harry Potter and Alexander Hamilton. The third? A straw with one hole.

These types of moments are perfect for a holiday show leading up to the stress of finals. When asked what makes the holiday show so special, Rudy sums it up perfectly, “I think the holiday show is different from the others because of the amount of pressure we’re under. We know Santa is checking his list (twice, in fact), and he’s informed us in the past that a bad performance is a great way to wind up with a lump of coal.”

With the hilarity that could surely be heard out in the hall, it seems like the improv group will be pretty happy with what they find in their stockings on Christmas morning.