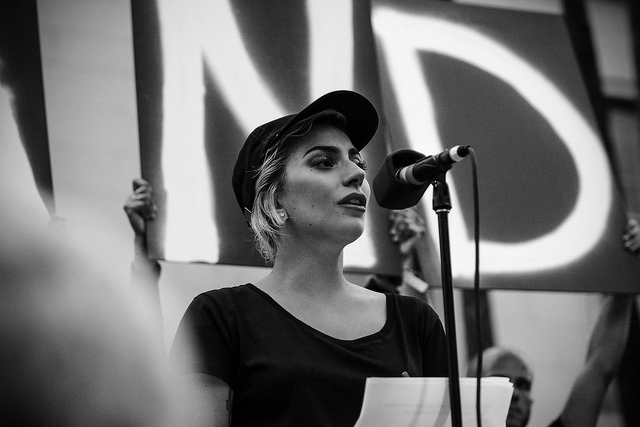 Yes, the Patriots won the Super Bowl for the fifth time. Yes, the commercials were as over-the-top as ever. But if you’re a bigger fan of spectacular shows than you are of football, the real reason you tuned in on Sunday was to watch Lady Gaga own the stage.

And that she did. Lady Gaga literally—and figuratively—soared through her half time performance, delivering a show that people will remember for many Super Bowls to come.

With her powerful vocals on full display, Lady Gaga took us through a medley of her top hits—including “Born This Way,” “Poker Face,” “Telephone” and “Just Dance”—accompanied by her iconic dance moves.

The show served as a reminder of Gaga’s many talents, one of which happens to be putting on performances that rival those of any other major pop star out there today.

Junior Gabrielle Callori, said that this show made her “become a huge fan” of Gaga.

“Her outfit was beyond beautiful and hearing her throwback songs was a great jam session to have with my friends,” Callori, a hospitality major, said.

One of the most memorable and heartwarming moments in her performance was when she sang her newest single, “Million Reasons.” She perched her leg on the stool of the piano—a signature move of Gaga’s—and briefly paused to say, “Hi dad, hi mom!”

It just proved that she was as excited to be there as her fans, or little monsters, as she calls them, were to see her there.

Arianna Smith, a sophomore, said that she thought her performance was one of the best half time shows she’s ever seen.

“Just being there, she is advocating for so many voices, and then to exceed all expectations I think she really just showed so much hope and unity in the world,” Smith said. “Gaga is known for her “Born This Way Foundation” and to love yourself no matter what. I think that shined through in her performance, and even if for a second, showed a sense of unity among Americans.”

After hugging one of the audience members at the end of “Million Reasons,” Gaga ended her set with “Bad Romance.” While performing what is arguably one of her best songs to date, Gaga had her third outfit change, sporting a white, glittery and pointy crop top—what I like to call her version of football shoulder pads.

For the finale, Gaga walked up some stairs that led nowhere, caught a glittery football, yelled, “Super Bowl 51,” and jumped out of the stage. Where did she land? We will never know.

An epic ending to what can only be described as an epic solo half time performance.

Senior Kristen Rozycki, a childhood education major, said that she was “very excited” to see Gaga perform, adding that she thought Gaga “rocked that performance,” amid concerns of her making a political statement.

Some people might say that Lady Gaga didn’t make one during her half time performance. However, these people would be remiss to dismiss the fact that she opened the show singing “This land is your land,” as a political statement in and of itself.

If you don’t think her cheeky tone at the end of her citing the Constitution—with the American flag forming out of stars in the background—was in some way a political statement, you might want to reexamine her performance.

“I know a lot of people were afraid because they thought she was going to make a strong political statement, but it ended up being subtle and she focused more on the unity of our country,” Rozycki said. “I think it showed her professionalism, and that she was there to do a performance, and she ended up giving a great performance.”