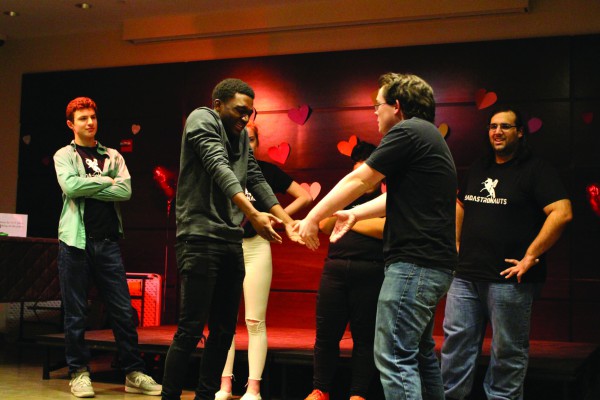 Have you ever seen “The Dating Game” where the three contestants were Shakira, Megatron and an emotionally distant rock? Probably not, unless you were at SJU’s Improv Club’s show on Feb. 15. On that Wednesday night in the DAC Coffee House, I found myself, as did many others, laughing so hard I couldn’t breathe.

SJU’s Improv Club, a.k.a. The Bad Astronauts, is a group of absolutely hilarious students with an affinity for improv and comedy. The show opened with a “celebrity guest,” the identity of whom the audience decided on. One of the actors stepped outside, out of earshot, and the audience chose a celebrity for him to be. After picking on Kanye West, the actor was invited back and the other actors began asking him questions, interview style, while he tried to figure out who he was based on the questions. The rest of the show was comprised of a bunch of short skits, each with a theme or idea, with a few long form skits in between. Long forms are where the audience gives a one word suggestion to inspire a set of skits that follow one another.

One of the short skits was the aforementioned “Dating Game.” In this skit, one of the actors goes out of earshot and the audience gives the three ‘contestants’ identities for the person choosing a date to pick from. The audience chose Shakira, Megatron and an emotionally distant rock. The actress choosing a date asked each contestant questions to figure out who they were. One question she asked was, “What is the ideal date you would take me on?” To this, ‘Shakira’ said that she would take her to Africa, ‘Megatron’ aggressively replied that he would take over the world and the ‘emotionally distant rock’ replied that it would take her to a garden to sit and do nothing. I could not stop laughing through this whole skit!

Another amazing skit was called “Half-Life,” where the audience gives a topic suggestion and the actors must improv a scene for two minutes. But then, they must redo the scene in half the time. This continues until the time allotted dwindles down to five seconds. The word given from the audience was ‘bees,’ so the scene began with one of the actors becoming a beekeeper talking about his bee farm. Two of the other actors jumped in as bees, one of them hyperactive, the other depressed. The final actress joined as the cameraman for the commercial the beekeeper was shooting. The bees kept interrupting the beekeeper as he tried to do the commercial, he threatened to bring out the spray if they didn’t behave, and then the bees stung him and he sprayed them just a time ran out. This two minute scene then had to be redone in one minute, 30 seconds, 15 seconds, and finally, five seconds, each time becoming more ridiculous and more hilarious. I couldn’t breathe from laughing so hard by the end.

One of the other hilarious skits they performed was “Family Vacation” where two actors describe a set of photos of their family vacation to Bushwick, a location suggested by an audience member, with four actors posing as the photo slides, forcing the two actors to explain the ridiculous scenes they came up with. The show contained many other short and long form skits, all of which were gut-bustingly funny.

The Bad Astronauts are incredibly creative and absolutely hilarious, and I would highly recommend attending their next show on Wednesday March 8 at 8 p.m. in the DAC Coffee House. All of the performers are extremely talented and they were all able to portray completely different personalities throughout the show. As a first time viewer, I know this will not be the last time I attend one of their shows.