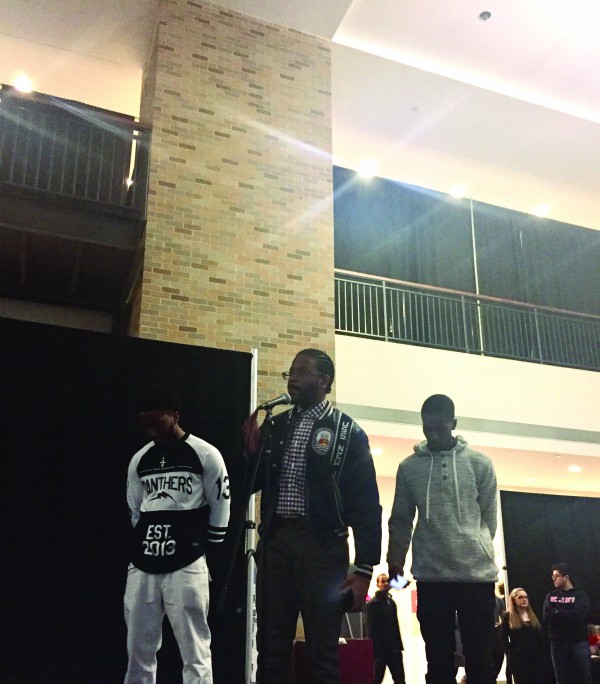 This past Friday, Feb.18, the weekly Java Johnnies Coffeehouse was themed “Black in America Again” in honor of Black History Month, and was centered on the experiences of black people in the U.S. Each performer embodied one of eight emotions and concepts, including tragedy, anger, action and revival.

The event took place in the DAC living room, which was filled to capacity and thrumming with energy and anticipation well before the first performer took the stage.

The first performance of the night was by Amber Reese, who recited “Water,” a poem by Porsha Olayiwola touching on the resulting tragedies of oppression black communities face in the U.S. Reese’s performance, which symbolized “tragedy,” was powerful and solemn.

The audience went completely still and silent as Keyome Johnson performed a wrenching rendition of Billie Holliday’s “Strange Fruit.” Even the usual Friday evening din of DAC settled down as soon as she sang the first note.

“Being able to sing and be a part of tonight is huge for me. I think it’s really important to share our talents, especially the black community, and being an African-American female, it’s so big for me,” Johnson said after the event. Johnson also stated that her performance was emotional and personal for her.

One of the most memorable performances of the night was a live art show with accompanying live music. Zen Welch painted a piece promoting self love as Keith Buxton and Caleb Merlain played a soothing freestyle piece on the saxophone and piano, respectively. At the end of the performance, Welch triumphantly showed off her artwork to the curious audience.

Performances were interspersed with short presentations by on-campus organizations such as Food for Thought, Spectrum, Lambda Pi Upsilon and Alpha Kappa Alpha.

Vice president of the University’s NAACP chapter, Morgan Bell, came up with the idea to host a special Java Johnnies focused on Black American experiences. Bell says that the inspiration for creating the event came from the current political climate.

“I was just looking at how my friends, my family and my peers that are black handle the situations that are going on around them, and I wanted to take that and put it into song, or spoken word, we even had someone do live art with music,” Bell said. “The theme itself can seem a bit depressing, can seem a bit heavy, because it is something that should be taken seriously. But all the performers were great, they really took on the roles that they were given.”