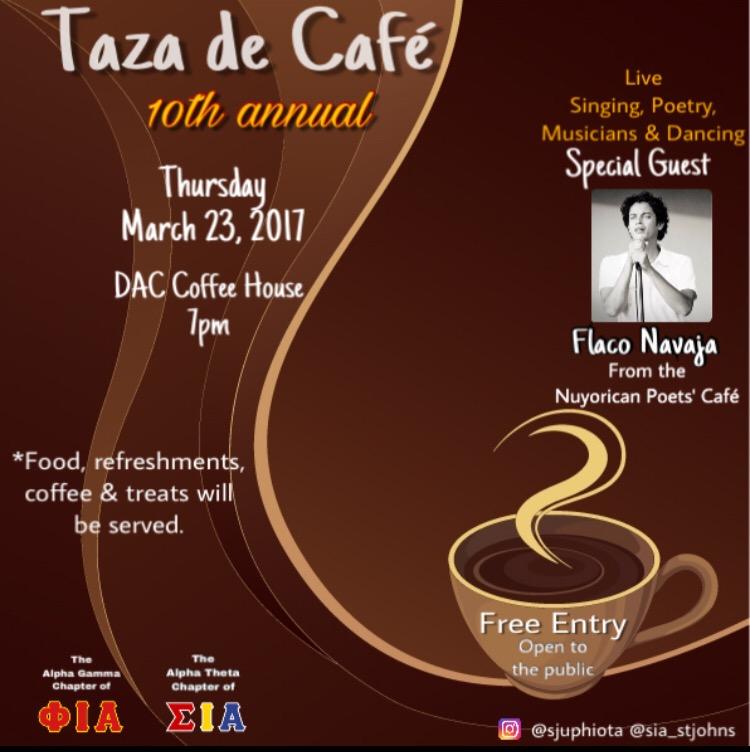 The tenth annual Taza de Café showcase is set to take place on Thursday, March 23 at 7 p.m. in the D’Angelo Center coffeehouse.

The event will be hosted by The Alpha Gamma Chapter of Phi Iota Alpha Fraternity, Inc. and the Alpha Theta Chapter of Hermandad de Sigma Iota Alpha Inc.

“For nearly a decade, Taza de Café has been one of the longest event in the St. John’s community serving as a platform to educate, empower and promote, not only ‘latinidad’ but also, the rich and diverse culture of the St. John’s population,” Jose Guevara, chapter vice-president of the Alpha Gamma of Phi Iota Alpha Fraternity, Inc., said.

“It was an extraordinary event to have on campus,” Joel Torres, a legal studies major, said. “It brought a lot of unity and culture and it was so unique in the way that displayed the diversity on campus.”

The members of the organization wanted to bring an event to the St. John’s community that showed appreciation for the arts and the many talents of the student body.

The undergraduate members said they noticed that the Latino community at St. John’s needed to bring that Nuyorican Poets’ Café style and sound to campus. Under the leadership of Jose Williams and the support of Manuel Cuzco, Gerald Williams, Chris Williams, Nathanael Lowery, Waldo Guevara, Gary Santos, Jorge Santos, Jorge Alguera, Raymon Valez and Shamil Rodriguez, they were able to introduce the event.

According to Jose Williams, who was the president and event coordinator of the Alpha Gamma Chapter of Phi Iota Alpha Fraternity, Inc. at the time, the event has brought out singers, poets, comedians and musicians. It has also drawn out students from all over New York City campuses, presenting them with an opportunity to express and connect with others through their sincere form of the arts.

Popular poets and spoken word artists across the nation have also participated in the events, including Oveous Maximus, Anthony Morales and Caridad De La Luz “La Bruja,” Immortal Technique, among others.

“Taza de Café is an annual event that we hosted in order to expose the talents of the New York community at St. John’s,” James Livia, the current chapter president, said. “Everyone is welcome to participate and come to the event next Thursday.”