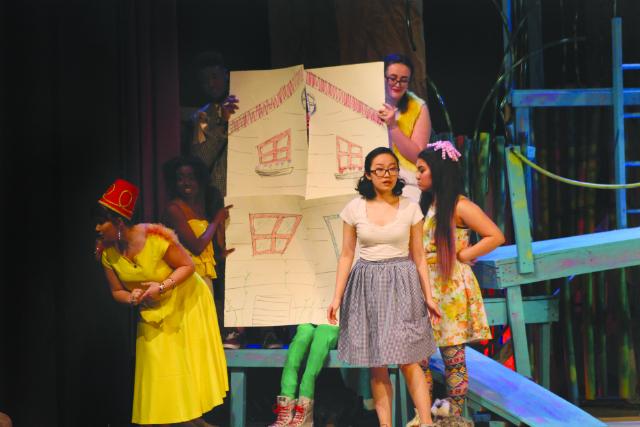 Student performers on stage at the Little Theater for Chappel Players' "Wizard of Oz."

This past Thursday and Saturday, the Chappell Players Theatre Group (CPTG) staged their own version of “The Wizard of Oz” in The Little Theatre. The show, directed by Anthony Pound, successfully prevented a classic story from feeling too familiar.

Its Saturday showing at 2 p.m. was heavily attended by families and children, and had a comfortably short running time of a little over an hour and a half.

The show was pared-down in many aspects, from its simple yet vibrant costumes—including a fun interpretation of the mythical ruby slippers: glittering, almost shin-length silver sneakers— to its overall staging, but went all out where it truly mattered.

The set design consisted of wooden platforms painted in a light shade of green and a jutting, multicolored gate that opened to reveal characters such as the Tin Woodsman and the terrifying incarnation of the Wizard of Oz himself.

Rather than taking up time with dizzying set changes, the lighting served as the chief determinant in settings. The soft green lighting of the set intensified during scenes in the Emerald City and took on a more neutral yellow tone in Kansas. However, the most creative touch to the set design was the yellow brick road, which ran through the aisles of the Little Theatre, expanding the space for actors to play in and fully immersing the audience in the land of Oz.

Audience participation was encouraged throughout the performance; my favorite part of the show was during its flower field scene, where the main cast struggles to snap out of a hypnotic spell induced by magical flowers. Prior to the scene, ensemble members passed out prop flowers to selected audience members, who held them up as Dorothy and company filtered into the aisles, entranced by their beauty. The Cowardly Lion, played hilariously by Gabrielle Laurendine, pawed and sniffed at the flower in my hand while I tried (and failed) to keep a straight face.

The cast, led by a sweet and optimistic Dorothy played by Yuchen Jin, melded well together and made for a fun, lighthearted dynamic. The two characters who were the most difficult to look away from were the Tin Woodsman, played by Aria Laucella, and the iconic Wicked Witch of the West, played by Johnathan Luc.

From her first moment onstage, Laucella fully embodied the physicality of the Tin Woodsman, each movement consistently jolting and mechanical. Luc commanded every scene he was in as the Wicked Witch, donning a dramatically towering green wig and all-black outfit, complete with a flowing cape and impressively sinister cackling.

The use of practical effects was underwhelming at first. At the beginning of the story, a hastily crafted paper cut out was meant to represent the house that accidentally kills the Witch of the East, setting some low expectations. It reached a grand high point during the first appearance of the eponymous wizard, whose bumbling human self is later played by Michael Walker. In a dissonant and scattered chorus, groups of cast members created the echoing effect of the Wizard’s thundering voice. Offstage, cast members manipulated the Wizard’s eyes, which appeared to be floating orbs of light, while a few members onstage operated his giant cardboard mouth, syncing up their movements to the Wizard’s lines. The theatre of otherwise noisy children and babies went completely silent, as everyone present was captivated by the impressive display.

While it is difficult to maintain an air of uniqueness when rendering such a beloved story, CPTG’s production avoided almost all the pitfalls of doing so. The production exceeded my expectations of being a cute-yet-forgettable rehashing of the classic story, and its added creative flourishes served to keep it feeling new and engaging.