A full vision of the sounds of spring 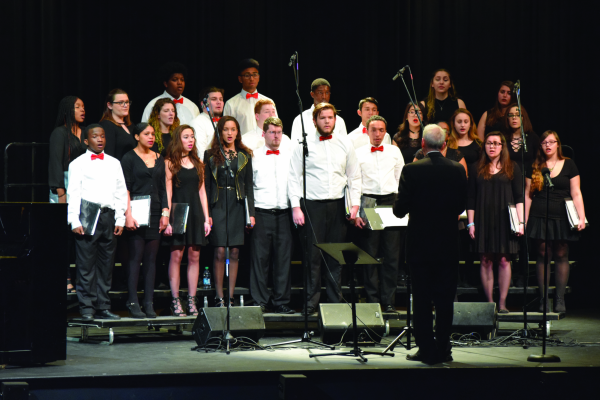 Spring has sprung and so has Mixed Chorus with the direction of Kim Oler.

“It’s in the same vein, all their songs,” Joseph de Rege, a junior computer science major, said noting the clear vision Oler goes for. “That’s the style the director wants to go for.”

With an estimated 50 people in the audience, including people of all ages, the night kicked off with the President of Mixed Chorus, Sarah Giordano, introducing the chorus and the first two songs in their setlist, “Salmo” and “That Lonesome Road,” to the crowd.

After these brief two songs, Oler noted that he hoped the night would showcase the Mixed Chorus’ range and versatility.

The third song, “Seasons of Love,” and the fourth song, “Dirait-on,” live up to Oler’s hopes, showcasing strong harmonies and beautiful solos sung by Kayla Knight and Richard Klein Jr. in the style of Broadway that does “Rent” justice, while also letting the sopranos standout in a fully French song.

After this the chorus connected back to our Catholic roots with the contemporary gospel, “Jordan’s Angels.” They finished off the last song before the intermission, “Helplessly Hoping,” with a core group of long standing choral members.

Mixed Chorus threw it back even more with two Latin songs, “Kyrie” and “Gloria” from “Mass in G” by Franz Schubert. Immediately after two traditional and classical songs, Oler presents two contemporary songs, “Ready” and “Turn,” written by October Project, college friends of Oler, that particularly touched him. T

his shows Oler’s love for music from all ranges and genres, and his students appreciate this experience.

“I like that we do a lot of different types of songs,” Michael Parnell, a Mixed Chorus member, said.

The last three songs especially highlight the chorus’ versatility. Going from the pop sounds of “Lean On Me” to the classical Latin lyrics of “Omnia Sol” and back to more poppy a cappella sound with “Sing” by Pentatonix.

Throughout the night, the audience could see not only the Mixed Chorus’ talent, but also their passion and enjoyment.

Alexandra Brown, a sophomore health and human services major, said, “I just think they are really talented,” highlighting her admiration for the choral members.

Director Oler said, “These are such great group of kids,” highlighting his admiration for his own chorus. “You can’t imagine how I feel when these kids are singing at me and beyond.”

Director of Performing Arts, Nigel Gretton, said, “Mixed Chorus represents a more than 100 year tradition,” and Kayla Knight, PR for Mixed Chorus, chimed similar veneration, “Most of the audience was alumni, so just the fact that this chorus has such an impact on them is so great.

We just want to keep trying to make people smile with our music.”

All in all the spring concert showcased not only Mixed Chorus’ talent and versatility, but also the appreciation that St. John’s has for them.