New Flix on Netflix: “13 Reasons Why” 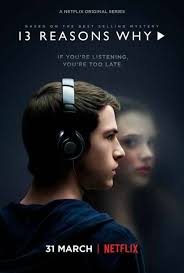 “13 Reasons Why” tells the story of Hannah Baker (played by Katherine Langford), a 17-year-old high school student who, due to a series of unfortunate events, decided to take her own life. She leaves behind a set of 13 cassette tapes that she recorded her voice on, indicating 13 reasons why she committed suicide.

The 13-episode Netflix original series, based on the novel by Jay Asher, follows along with Hannah’s tapes, showing key moments in her life as she saw it and what was happening to those mentioned on the tapes as a result of them. It also shows the moments leading up to the legal battle between Hannah’s parents (Kate Walsh and Brian D’Arcy James) and Hannah’s former high school, Liberty High.

Powerful messages about the lives of people in general, not just limited to teenagers, are seen throughout the series. This is a show that places importance on the understanding of serious matters that happen all around us that many people are not brave enough to talk about, such as rape, assault, anxiety and suicide. It shines light on issues that some would prefer to keep in the shadows and pretend like they don’t exist, and it is done with such tact and taste that it doesn’t feel like you’re watching a show.

The production crew behind “13 Reasons Why”- including Tom McCarthy, Brian Yorkey and Selena Gomez- as well as the cast, were very adamant about presenting these situations authentically without shying away from the tough parts, and they have definitely accomplished that.

“13 Reasons Why” is an intense, deep, heart-wrenching and soul-crushing piece of art. Nothing prepares you for what you will see, hear and experience in watching the series.

It is emotional and beautiful, and it will make you want to run to the ones you love and hold them for as long as you can.