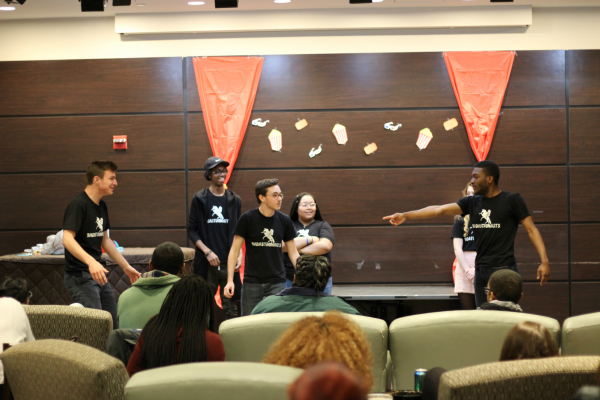 Bad Astronauts perform in their end of the year show on April 19.

Serena Williams, Spongebob Squarepants and a deflated soccer ball go to a party… Sounds like a bad joke, right? Well, St. John’s Improv Club, the Bad Astronauts, filled the Sodano Coffee House in the D’Angelo Center with laughter with this very premise on Wednesday, April 19. The Bad Astronauts hosted their last official show to close out the school-year rather well, according to the full house bursting with laughter.

“I thought it was hilarious. I especially liked the last scene,” Trey Wallace, a sophomore, said highlighting the group’s ability to start slow and end on a high note.

The Bad Astronauts started off slow and built up anticipation from the very beginning. From behind the curtain they warmed up loudly with chants and songs reminiscent of sports or competition teams. They started off the show by creating a mock presidential debate from the audience area where some of their members took on the personas of Donald Trump, Bernie Sanders, his bird friend and “that lady from that one commercial” leading to the entire group storming the stage and setting the tone for the rest of the night.

The performance began with long-form improv where a select few members came up with stories having to do with the word “dance” followed by skits spurring from those stories, which included a grandma grinding at prom and father abandonment.

The second part of the performance consisted of two short-form improv games called “Party Quirks,” “Late Excuse” and “Half-life.” “Party Quirks” involved three members, assigned to three random audience suggestions for party-goers, and the fourth member hosted the party they attended and had to guess who they or what they were. Their characters were Serena Williams, Spongebob Squarepants and a deflated soccer ball.

The scene began as the party host, who is an antisocial person with no friends, greeted each of her guests, and quickly guessed Spongebob but had more difficult, albeit hilarious time identifying Serena Williams and the deflated soccer ball.

“Late Excuse” is exactly what it sounds like, a late employee coming up with excuses for their tardiness. This game included four of the Bad Astronauts; two silently acted out three excuses (one standard excuse, one ridiculous excuse and one nearly impossible excuse), behind one member playing the boss and one member playing the late employee who had to guess the excuses suggested by the audience.

“Half-life” had four members performing the same scene in a location suggested by an audience member four times each time half as short as the last one.

The scene was set in a coffee shop, which could have turned out bland and boring, but ensued in loud laughter due to the uppity, hipster-ish characters created by the Bad Astronauts.

The Bad Astronauts ended their show with another long-form performance with a couple of different members from the first one. This time the word was “hair” and it ended with a rather ridiculous situation involving a shower and a pizza delivery man.

“Every time we meet we make funny,” Bad Astronauts member and a sophomore TV and film major, Maya Wade said, which seems to reign true considering this performance.

Alexa Teed, a sophomore TV and film major, also expressed her love for the Bad Astronauts as an audience member, “Everyone should come out and support them, they are hilarious.”

If you missed your chance to see the Bad Astronauts at their official end of the year show, you still have a chance to come out, support them and watch them “make funny” at Java Johnnies on Friday, April 28.