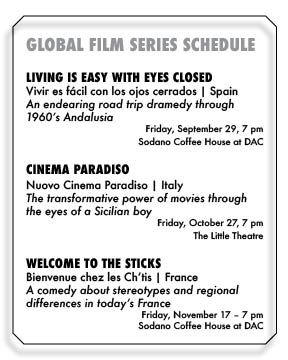 There’s no doubt that St. John’s is made up of a culturally diverse student body, so it only makes sense to implement a movie watching experience on campus that allows students to view foreign films from all over the globe.

The Global Film Series was dreamt up over the summer by Professor Douglas Cantelmo, along with Campus Activities, as a way to further fulfill St. John’s global mission. Cantelmo teaches in the Institute for Core Studies and leads study abroad programs on the Paris and Rome campuses through the lens of urban design.

“I’m passionate about movies and everything global so this project is a perfect match,” Cantelmo said.

Members of the University, from students to administrators and faculty will be exposed to a wide array of international films, many of which cannot be found on streaming services like Netflix or Hulu.

Cantelmo feels that it’s important to bring aspects of global culture to campus on top of actually taking students abroad for the semester or short-term programs.

“Living is Easy with Eyes Closed” (“Vivir es Fácil con los Ojos Cerrados”) from Spain tells the tale of an endearing road trip dramedy through 1960’s Andalusia and is the opener to the Global Film Series on Friday, Sept. 29 at 7 p.m. in the Sodano Coffee House in the D’Angelo Center.

The second film in the series “Cinema Paradiso” (“Nuovo Cinema Paradiso”) from Italy is about the transformative power of movies through the eyes of a Sicilian boy and will be shown Friday, Oct. 27 at 7 p.m. in the Little Theater.

“Welcome to the Sticks” (“Bienvenue chez les Ch’tis”) a comedy from France about stereotypes and regional differences in today’s France will end the semester Friday, Nov. 17 at 7 p.m. in the Sodano Coffee House.

“I think it sounds cool, in the U.S. we never really get to see movies that weren’t made here so it’s cool to see how different countries and cultures make films,” junior Amarachi Ugonabo said.

“All three films are lighthearted but also get to core of what it takes to form meaningful relationships in the countries where they are set,” Cantelmo said. He also anticipates that in future semesters the Global Film Series will feature movies from outside of Europe and explore the world of cinema from every continent.

For questions or comments on the Global Film Series reach out to Professor Cantelmo via email at [email protected].