“The Addams Family” Spooks Up SJU

The Chappell Players' latest production is tons of fun 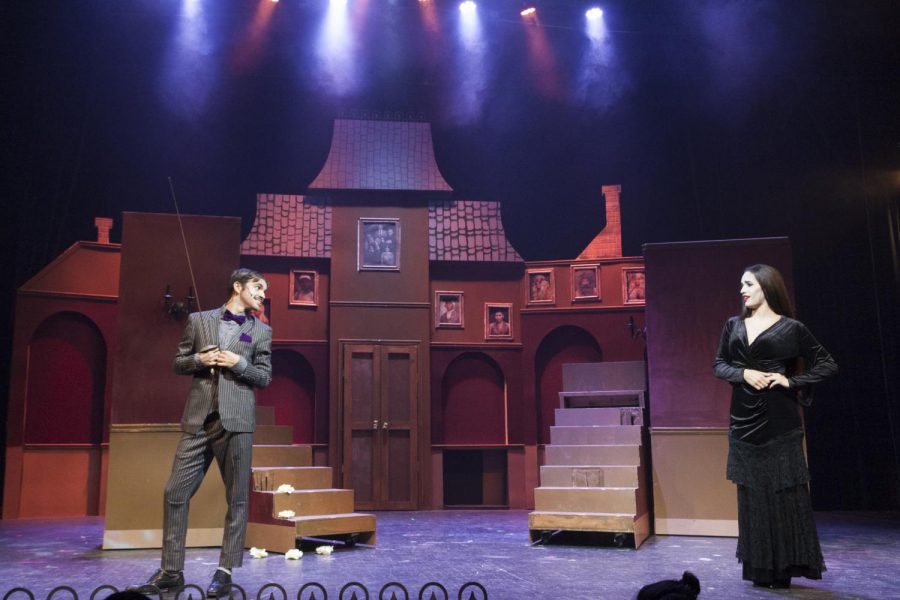 Thursday, Oct. 5, was opening night for the Chappell Players Theater Group’s production of “The Addams Family” in the Little Theater.

The lighting and sound effects filled the theater sending the audience to Central Park, the location of the Addams Family home. The show was packed with passionate performances, talented vocalists and light-hearted comedians that brought the characters to life on the stage.

Aria Laucella was astounding as Morticia Addams, capturing her grace, tenacity and sullen disposition, especially in her performance of “Just Around the Corner” where she sang about the sweet release of death that would save her from dealing with her worldly troubles. She carried herself with elegance while Amanda Scialabba as Wednesday Addams bore a grimace that was a cross between discomfort and pure malice; It was perfect.

Scialabba reintroduces us to Wednesday Addams as a young adult with an array of feelings. No emotion was ever able to permeate Wednesday’s steely façade in any of the portrayals of Wednesday Addams in movie and television adaptations we grew up with. In this section of the Addams’ timeline, Wednesday faces a massive identity crisis and a jarring obstacle to remaining her typical maleficent self: Lucas, a boy from Ohio.

The show challenges orthodox definitions of what a perfect relationship is, whether it be between partners, between parent and child, or between siblings. It centers around how a formidable time in a child’s life changes a family’s dynamic.

The show was perfect for family weekend as it focused on Wednesday becoming her own person and wanting to get married. Many parents are only now dealing with what it means to have a child that lives away from home, learning to stand on their own two feet. The cast kept the show moving seamlessly with intermittent skits performed by the undead Addams ancestors that upholstered the whimsical stylings of the show’s comic relief, Fester Addams, played by actor Jacob LaChappelle.

Matt Agoursalidis did an exceptional job playing the whimsical and demented Gomez Addams. Although he seemed to lose the Latin accent Gomez normally wears distinctly, Agoursalidis gave a powerful and emotional performance most noticeably in “Happy/Sad,” a song that exemplifies the duality of the emotions associated with a parent losing a child to the world beyond their control but for reasons that will make their child happy.

Having seen the original Broadway cast perform the musical, it was a bit disheartening to watch the performance and have it miss some songs that deepened connections between characters. It may very well be outside of the control of any of the Chappell players, but it was certainly something that was in mind. The quality of the work left the audience wanting more.

Freshman Norma Valenzuela said, “The show made me realize how love can exist with darkness. The Addams Family reminds us that no family is perfect and is really honest about that.” The Addams Family has always been known for being deeply loving through their fancy for the demure and demented. Valenzuela added, “I think it would have been nice if the actress that played Alice had another song because she was really talented and I really liked the one song that she had.” The Chappell Players received a standing ovation after their opening night performance.

The Addams Family continues to teach us the importance of family, the beauty of darkness, that there’s nothing wrong with crazy and that normal is an illusion.