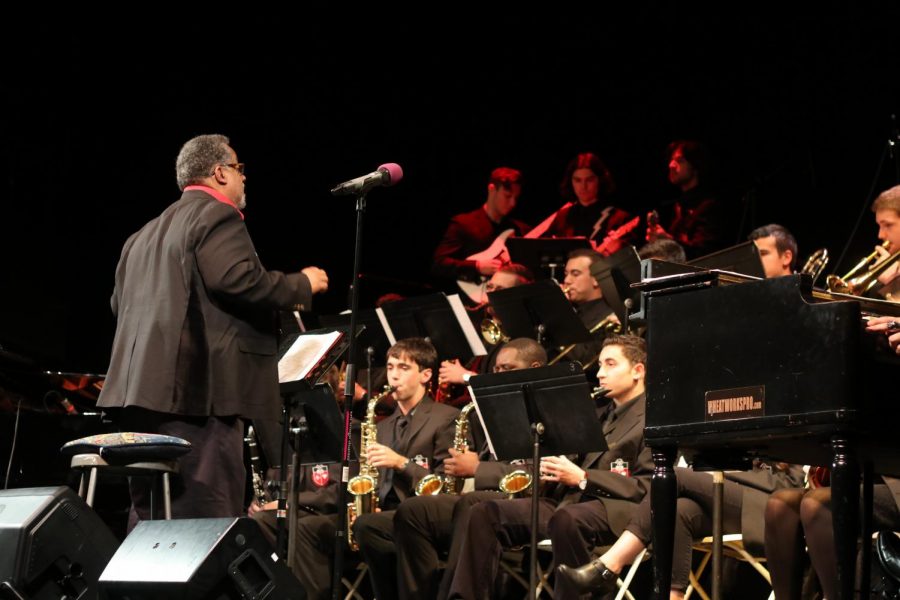 Last Friday night, St. John’s Jazz Band celebrated its 30th anniversary with a concert in the Little Theatre. The Jazz Band came out of a time that was primarily dominated by rock n’ roll. Founded in 1987 by some enthusiastic students, the Jazz Band has been putting their own flavor into classical music for decades.

What I got to experience was an impressive twist on some classic songs, which made them more than enticing enough for today’s audience. They operate at a cross between being true to the classic music of their genre and modernizing it.

Nigel Gretton, director of performing arts, began the evening with his opening remarks.

He wasn’t the only one who was excited; the Little Theatre held family, friends and alumni, anxiously awaiting to hear the melodious magic.

Under the direction of Ferdinand Motley IV, a veteran educator and performer, the theatre emanated smooth yet powerful jazz for two hours.

He said of the band, “It has been my pleasure to direct this band, I’ve been doing it for 18 years.”

They kicked off with “Birdland,” arranged by their very own assistant director, Dylan Defeo. It had such a strong drum beat I felt it in the fifth row.

They also played hits like “Route 66” and “It Don’t Mean a Thing (if it Ain’t got That Swing).” There were a few songs that featured vocalists Kayla Knight and Remy Martin; both gave moving performances.

During intermission I caught up with a St. John’s student that was in attendance. Amanda Franco, junior, was invited to see the Jazz Band’s concert. Although it’s not something she would usually attend, she was instantly hooked by an amazing drum solo by Sean Sokol during “Caravan,” which he added flair to by using light up drumsticks.

“That drum solo was incredible, it literally had me going. Their hard work was definitely evident, you could see that with all their solos and everything. All of them together, they just work so well. It’s really great so far.”

After the show, I had the chance to speak with the assistant director of the band for almost two years, St. John’s alumni Dylan Defeo. Backed by his many years of playing keyboard, he manned the organ for the evening, and gave quite the solo during “Mr. Magic.” Having joined the jazz band his freshman year, he is no stranger to performing for St. John’s.

“We wanted to do a really big show just to celebrate, we had this milestone year. We really hadn’t done anything like this before so there was a lot of prep work. We added a whole bunch of new tunes, and we polished up a couple of older ones. Some songs were from older generations, and with the new ones the guys could show off a little bit, we were all having a really good time.”

To wrap up the show, Mr. Motley stepped down from directing for “Children of Sanchez” and got behind a smaller pair of drums himself. Hearing him play with the students was a treat. Then, after being individually introduced by name and hometown, each band member was given the opportunity to show off some of their solo talents during “Cold Duck Song.”

The Jazz Band of today would definitely make its founders of 30 years ago very proud. The night was a great success, they had solid musical work and a beautiful sound. Here’s to many more years of having our wonderful Jazz Band.