A Whole New World for “Aladdin” 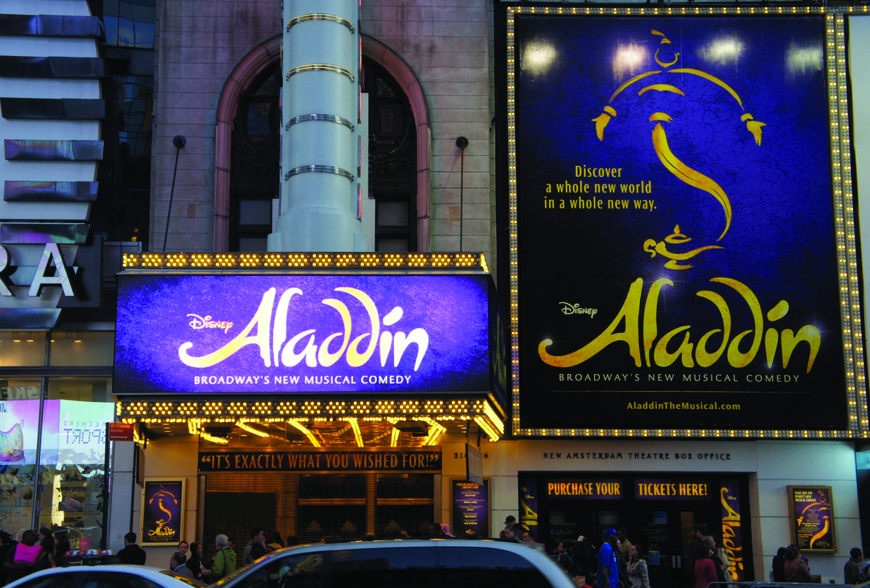 All of us know the story of Aladdin: a boy finds a magical lamp, the genie grants him three wishes and he falls in love with a princess.

But “Aladdin The Musical” on Broadway brings the story that we all know and love to life with added musical numbers, new characters, and enough sequined harem pants to last a lifetime.

Although it officially opened on March 20, 2014 at the New Amsterdam Theater, every seat in the house was full on Valentine’s Day with couples both old and young. So, what is it about this story that keeps bringing us back?

For starters, most people already know this story, which has the potential to make this two-hour production predictable and repetitive.

But instead of focusing solely on Aladdin and Jasmine, the Genie’s character was really brought to life. Played by Major Attaway, the Genie’s first musical number was “Friend in Me,” for which the biggest applause of the night was given.

Between his charisma, bigger than life stage presence and jokes that were actually funny, he added something special that the musical really needed.

In addition, the themes that run through the story are timeless, and fit into our country’s climate even in 2018.

Portrayed by Telly Leung, there’s the struggle of Aladdin, a boy who wants nothing more than to become someone better, beat the odds and make his late mother proud, sentiments expressed in the number “Proud of Your Boy.”

Then there’s Jasmine, who’s seemingly trapped by tradition and sexism in her nation, unable to make her own choices or see the world around her. Isabelle McCalla truly captures how it feels to not have a voice.

These aspects of the story made “A Whole New World” that much more magical. It was the feeling of a first love and the wonder of mystery and exploration all in one. While the magic carpet lifted the two up into the air with hundreds of lights creating the illusion of a starry night, the audience fell silent in awe. It’s easy to see why this production was nominated for five Tony Awards. The elaborate and colorful costumes, sets and songs touched the hearts of everyone in the theater, and made me especially nostalgic.

Its success even inspired the idea for the new live-action adaptation of the 1992 animated film, which will star Will Smith as Genie and will be in theaters in May 2019.

So, if you’re looking to revisit your childhood and see the film through a different lens, the musical won’t disappoint.