New show on PBS with help from St. John’s faculty 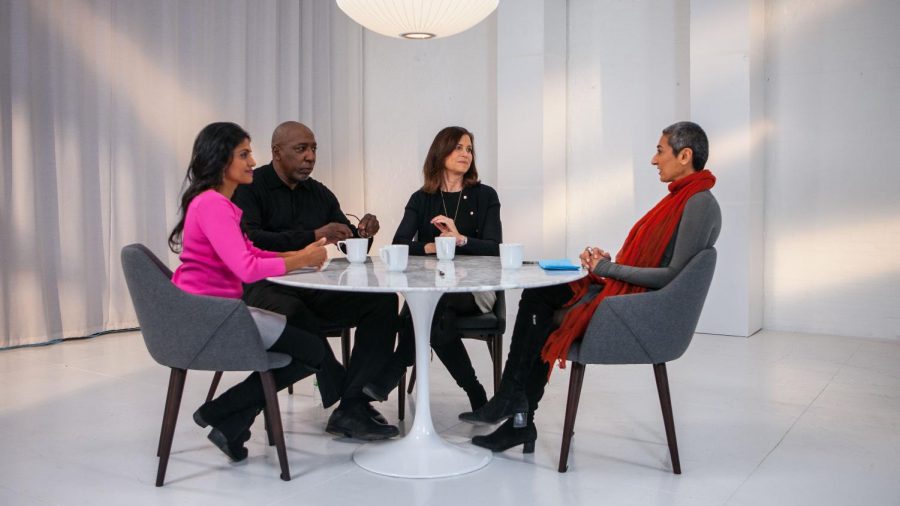 #MeToo recently became a popular tag on social media that sent a message: sexual harassment is extremely common, and it is not okay.

The #MeToo movement started in 2006 by activist Tarana Burke, but last year it gained new momentum brought on by a wave of sexual harassment allegations. Hoping to keep that momentum going, Zainab Salbi, founder of Women for Women International, worked with PBS to create a show about the issues surrounding the #MeToo movement.

The show “#MeToo, Now What?” premiered in February with five half-hour episodes, each focusing on a different aspect of the cultural issues of how women are treated.

This show is extra special and meaningful to St. John’s because one of the university’s faculty worked on it.  Liz DeLuna, a graphic designer and Art and Design professor at St. John’s, was the motion graphics artist for “#MeToo, Now What?”  DeLuna executed the design for the show, including the animation for the opening title sequence, type on screen, the end credits and more.

DeLuna said she was very excited to work on this project and is passionate about it because she has “dealt a lot with feminism…Just the whole idea of the show, to [her], is fantastic.”

The show was made relatively quickly, and DeLuna described working on it as, “fast and furious.” “We started in January with absolutely nothing,” she said.

This show was incredible because it had uncomfortable yet important conversations about a lot of issues and included many different perspectives from people of all races and of both genders. While making the show, Salbi traveled across America to get as many opinions as possible.

She talked to waitresses, businesswomen, victims of sexual assault and rape, pastors, male artists whose lyrics use derogatory language towards women and more. She also had featured guests, including authors, broadcasters, filmmakers, executives, a sexual harassment offender and others.

Salbi began the show by talking about the #MeToo movement itself and what it means for both women and men in America.

“‘Why is this happening now? Where is all of this rage coming from?’” Salbi asked.

“I think what we’re seeing is generations of rage, and I think this is just the tip of the iceberg,” Ijeoma Oluo, author of “So You Want to Talk About Race,” said in response.

The social oppression of women is engrained in our society. The culture of sexual harassment in America is widespread and it happens at some point to every woman, even the most powerful and successful white women.  It is astonishing because it took privileged women speaking out in order for the issue to be noticed and taken seriously.

For hundreds of years, society has said that women’s bodies are not their own.

“Women’s sexuality particularly has been commodified and commercialized,” Salbi said.

Growing up, men are taught, whether directly or through observation, that women are objects to be won. “Locker-room talk” especially turns women into a currency that a man uses to prove how valuable he is because he “nailed” a certain girl.

Some men also don’t stop trying to win over a girl when she has clearly indicated that she is not interested.

One man Salbi spoke to at a college said, “…men view rejection as an invitation to try harder.”

Doing this does not respect a woman’s autonomy. By persisting, the man turns getting a date into a game and the woman is a prize and no longer a person. This mentality, that women are for men, is what leads to catcalling, sexual harassment, assault and rape. This mentality puts men above women.

Salbi brought up the idea that a lot of men believe they are not the kind of person that would sexually harass a woman and that they treat women equally.  She refers to these men as the ‘good men.’

“The first thing about that is to do away with the idea that you are good. You are socialized and you are a part of the system whether you believe yourself to be outside it or not,” Mychal Denzel Smith, author of “Invisible Man,” said of the ‘good men.’

Salbi also brought up the issue that, now, the men being accused of harassment often lose their jobs and she asked whether we should be concerned about this.

“…Right now we have a society where only three percent of rapists see jail time. And…when we just have…a handful of men losing their jobs after decades of harassing women, we’re already saying, whoa, …let’s not push it too far…We constantly talk about the potential of harm to men and we rank that as more important than the actual harm… done to countless women over and over again,” Oluo said.

Salbi also talked about the issues of the sexualization of women in industries and establishments such as advertising, gaming, the military, tipped jobs and business.

When asked why this show was important, DeLuna said, “I think just to start making people aware of the women’s perspective in the world and the kind of things that we’ve all taken for granted for so long that we’ve probably all gone through and thought that was just a part of being female in society and really making it clear to people that a lot of things that happen are really not okay…”

“…I think it’s important that someone starts having this conversation…but, I think this is just the beginning…” she said.

This show truly is important.  It is extremely eye-opening for both men and women, and #MeToo is an issue that we cannot let die down. The show can be found on the PBS website at www.pbs.org/program/metoo-now-what/.