Moments and Movements: The Era of Honest Pastiche 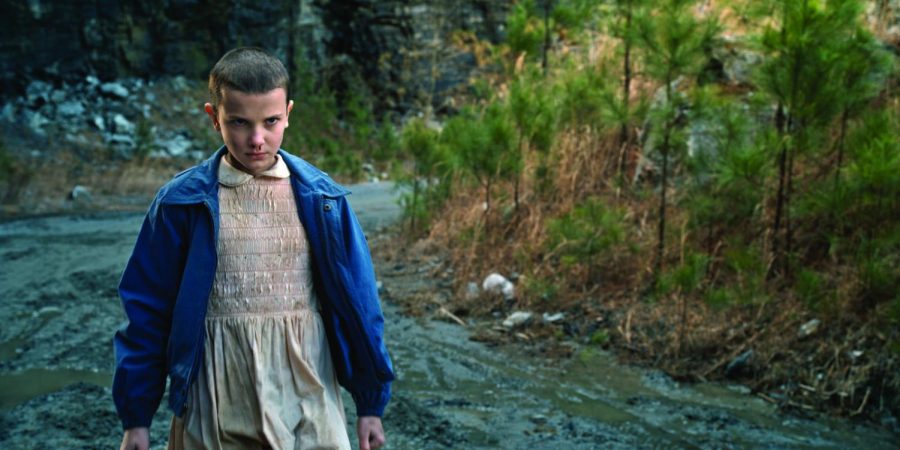 Millie Bobby Brown, in “Stranger Things” plays the character Eleven in one of Netflix’s pastiche shows.

Lately, pastiche pieces, or pieces that imitate different time periods, have trended around the late 70’s and 80’s time periods. Three popular television programs that have changed the pastiche game are “GLOW” (acronym for “Gorgeous Ladies of Wrestling”), “The Get Down” and “Stranger Things.”

“Stranger Things” centers around a group of sci-fi obsessed preteens and their teenage siblings in  rural Indiana in 1983. “The Get Down” follows young protagonists of color on their journey to break out of the South Bronx in order to pursue their dreams. “GLOW” is about a diverse group of actresses that struggle to find work due to the narrow standards set for women of the time and eventually become wrestlers.

These pieces are popular for two primary reasons. First, they are focused on unique plots with underrepresented character types in specific settings that were relatively absent from the mainstream media of the time.

Second, today’s pastiche shows give a more accurate account of the times on which they are based.

It is clear that these pieces were not inspired by pure nostalgia, because they don’t glamorize the eras in which they are set. Artists now have the awareness and hindsight to illustrate the injustices and social ills of the times they choose to document through their work.

“Stranger Things” excludes all of the glitz, glamour and prosperity often retrospectively associated with the 1980s.

The fact that the show takes place in a small town serves as representation for most of America at the time (aside from the monsters and superhuman children, of course). Winona Ryder plays a financially struggling single mom with a son whose friend group is relentlessly bullied for their appearances and interests. The subtleness of the background made it all the more engrossing.

“GLOW” portrays 1985 from a drastically different perspective. Set in Los Angeles, the show includes many of the classic 1980s hallmarks that “Stranger Things” excluded — a permed Alison Brie attends an aerobics class full of beautiful women in leg warmers.

From the very beginning, however, “GLOW” makes it clear that, although these women were more independent, they still had few options. The main cast of characters (all aspiring actresses) included several women of color, plus-sized women and women over the age of forty.

Because these women had difficulty finding roles, they settled for a half-baked, underfunded wrestling project headed by a sleazy aspiring sci-fi director. These women had to learn how to feign wrestling moves in sexually provocative — and sometimes racist — costumes in order to find work.

Perhaps the negative aspect of the 1980s that was most cleverly highlighted in “GLOW” was the xenophobia and racism fueled by extreme nationalism, customary of the Cold War era.

When casting the women into their wrestling personas, each woman of color was forced to comply with a stereotype in order to appeal to mainstream America.

For example, the Arab actress was strapped with plastic grenades, while a black actress was dubbed “Welfare Queen.” Furthermore, Brie’s character, Ruth Wilder, entertained with a fake Soviet accent as the “heel” of the performance.

This exemplified the fact that, although this is a time that many reflect back on with great affection, it wasn’t the best of times for many members of society. Racism, sexism, corruption in entertainment and antagonism towards the “other” were still very much prevalent.

“The Get Down” blended familiarity with unpleasant truth when portraying the South Bronx of 1978. Disco hits played as characters in bell bottoms and platform shoes boogied in a club that was owned by a notorious fictional drug lord.

The show made no attempt to conceal the prevalence of gangs, the drug trade and hyper-sexualization of women and girls.

In addition, we saw the blatant racism the main characters faced and imposed on each other. We viewed the vast impact of the Bronx fires, rampant crime and poverty that many families experienced.

Most of all, it showed how difficult it was — and still is — for underprivileged people to chase dreams with a past so heavy tying them down. It challenged the narrative of the American Dream that became so characteristic of the 20th century.

Overall, people appreciate viewing history without rose-tinted glasses. Although it’s often easy to look back on the past with fondness, it is important to remember that each era had its conflicts. Just because we are now living in the digital age does not mean that past times were simpler. Sometimes, it was quite the contrary.