A tribute to self-love and Pan-African heritage 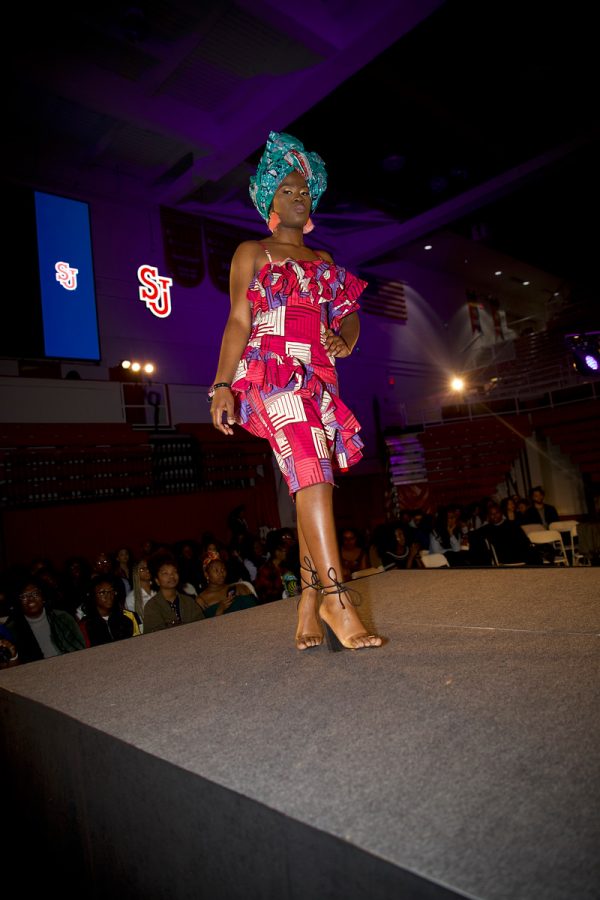 There was nothing and everything expected from the cold Thursday night in Jamaica, Queens on April 19, 2018. But at 8 P.M., loud drums roared with African pride and beauty from Carnesecca Arena. It was the annual OSHUN fashion show, hosted by the African Student Association, in collaboration with Haraya and the Latin American Student Organization.

Immediately walking into the arena, there were representatives from every country on the African continent and the Caribbean islands. Women and men were dressed in traditional Ghanaian, Nigerian, Haitian and Jamaican clothing and modeling their cultures.

“It was incredibly inspiring to see the African community come together and support each other,” said Mba Madja, who was working backstage.

The catwalk began with a powerful strut by the president of ASA, Atem Tazi. Wearing a bright blue one-piece bathing suit and a yellow cape, she proudly introduced herself and her voluptuous body as an homage to her ancestral roots.

“Some of the most exciting things about the show had nothing to do with the show, but the energy of the crowd and the people who were in the show,” said Esther Alaran, a junior Marketing major and model in the show.

Then, drenched in gold sparkles and gold cloth, members of ASA performed a testimonial dance.

“It was scary because I was worried I would mess up,” Omari Smoak, a sophomore TV and Film major and ASA performer, said about the event. “But I was happy to be a part of it all.”

Finally, after a couple hours of waiting, the catwalk began.

During the second set, Queen E; third set, Lavie CK and final set, EZ Collection, there was a mix of both male and female African designer clothing. From bright geometric dresses to dark Ikat pants, the designers sought to show a unique assortment of colors and patterns to proclaim their heritage.

“For me, modeling in this show was about continuing my journey of self-love, being free and being true to myself,” Alaran said.

By the end of the evening, the crowd was growing restless to see the performance by the afrobeats artist, Maleek Berry. But before his performance, a local duo rap group opened up with a few songs.

Then, Berry stepped on to the stage. The crowd rushed out of their seats to applaud and dance to his hit songs, “Kontrol,” “Been Calling” and “Let Me Know.”

With smiles on the participant’s faces, the night was a huge success in celebration of St. John’s University students’ African pride.

“Even if you aren’t African or you don’t know where you come from on the African continent, to be able to see that talent and support is a beautiful thing,” Mba Madja said. “But just like with any minority group, it’s important to remember we are not just the material parts of our culture – there is a history and we’re still suffering.”