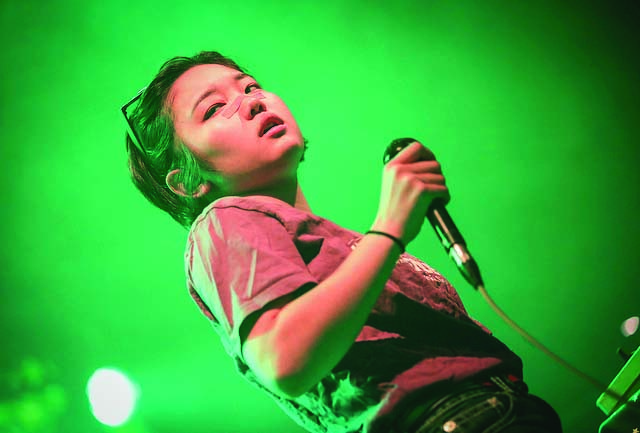 Indie pop band, Superorganism, have upgraded a number of times over the past few years, from exchanging demos with each other on Facebook, to moving into a London penthouse , to releasing a successful debut album, to nearly selling out their second New York City concert at Brooklyn Steel on Monday, Sept. 10.

“I think this is our biggest show yet!” Yuno, their opening act, announced before the 1,800 person venue was even half full.

The headlining show made it even more apparent that Superorganism is a group from the Internet era, for the Internet era. They produce music for today’s youth through the creative lens of someone who is actually their age.

With strobe lights, video game projections and throbbing synthesizers, their electric 18-year-old frontwoman Orono Noguchi wired the audience and shifted the space from an industrial concert hall to an intergalactic Gen-Z dance party.

It was engaging, literally.The set’s interlude was referred to as “Orono’s Time,” where she answered her fans’ questions, said hello to a friend she spotted in the crowd and did a cartwheel on stage.

The band, comprised of Noguchi and seven other members from five different countries, performed their self-titled record in its entirety, on a sort of iPod shuffle. Their music is full of bizarre samples and youthful exhaustion, an ode to online celebrities, webcam performers and anxious teens waiting for another text back.

They are real, they are raw and they are so interesting.

If Superorganism’s glitter-soaked live act is this entertaining at this early stage of their musical career, then there is no telling what the future of their sound or live act could hold. But in 2018, their sonic capabilities are just that, and something that other 18-year-olds are preoccupied with as well: The future.