Mancini talks the intersection of travel, storytelling and art 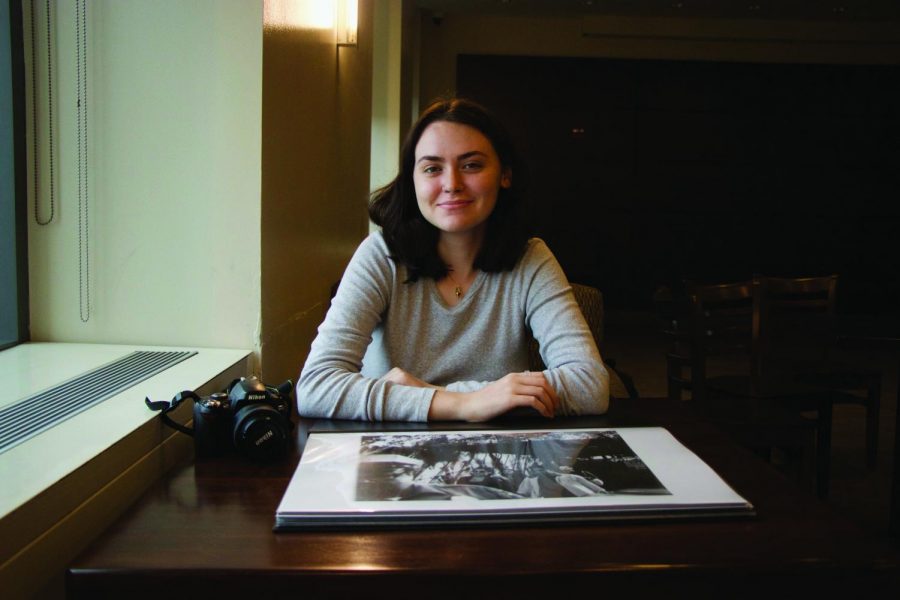 Madeline Mancini, sophomore and one of two recipients of St. John’s University’s Visual Art Scholarship, believes in the power of art to tell stories. Hailing from the suburbs of Las Vegas, Nevada, her photography has been influenced by travel and the desire to challenge norms, from a gender-role reversal photo series to a growing appreciation for abstract photography. She sat down for a quick conversation with the Torch to speak about her creative process and what she hopes to do with her photography in the future.

How did you first get into photography?

“In high school, I went to a magnet school, and my major was graphic design and with each major, you kinda had to have a minor.

When I was a freshman, I had put down animation.

I was the only freshman.

It was really embarrassing, everyone’s older than me and is understanding this way better than I am.

So I asked my counselor to switch and she was like ‘Well the only thing that’s open is photography.

Long story short; I got into it because you know I just felt like I was good at it.

I think having it as a class also helped.

But I think the fact that I had to produce work —  homework, assignments and all that. It made me want to follow through with everything and also being the youngest.

It was intimidating, I wanted to stand out a little bit, I didn’t want to be the stupid freshman that didn’t know what they were doing.

The most pivotal time, where I knew this is what I wanted to do, was sophomore year — spring break — and my family went to D.C. I remember — I still have the pictures — I was really proud of what I was taking.

I was like excited and so from then on I told my parents ‘I think I want to do this, this is a lot of fun,’ my parents were like ‘You have an eye.’

In school, we had to submit our work in a contest around the school district. I remember one of my pieces from D.C. won something and I was like ‘I can totally do this.’”

Have you noticed the change in space, from out west to over here on the East Coast, make a change in your art as well?

“Living in Las Vegas was.

You can only take so many pics of red rock, mountains, pretty flowers. I just couldn’t find any sort of inspiration there and I just hated it. There’s nothing to do.

So yeah, definitely. That’s why I think going to D.C. that essentially really opened my third eye, that’s where I was like there’s so many things to take pictures of. It was such an interesting place, it was different. It was a completely different culture on both sides. Definitely think that being in these big cities, where there’s’ a bajillion unique people, unique spaces.

On that note, do you think travel, or the constant changing of space, is almost necessary for art?

“Yeah, I think it is kinda necessary. I think, and for any medium, eventually your source of inspiration, I believe it can be tapped out. You can spend years and years in this one city and eventually you’re just gonna realize I’ve seen all these places, I’ve looked down all these alleyways, I’ve ate at all these restaurants. There’s such a huge world out there that you could be missing out on so much that could improve not just your art but yourself and your mindset. So, I think travel is necessary, obviously that’s not available for a lot of people but it can be little things. It can be going down to a small town or the town next door.here are little steps to take…”

What do you think the constant of your art is then?

“I think the heart for me and other artists maybe is their mindset, their emotional state. I know a lot of people that use art as a sort of therapy.

And that fuels a lot of their work. Honestly, stress. To have this deadline, this pressure it makes me look out for things more. It makes me have these different ‘Maybe I should do this instead of this.’ It drives me to create more and do more. I think people’s emotional state, even though is not constant, that’s a constant drive in art.”

Do you think there is a core piece to your art in particular?

“…I have a specific assignment called a portrait of a place — and it taking a place you’ve never been before and kind of giving it a little bit of a story. I always kind of look isolation in these pictures. Whether it be framing or an empty street a house in a weird placement, I always try to look for things like that. That alone starts to build a story around that image.

I tap into that, into Gregory Crewdson, who’s a photographer I’m obsessed with. That’s his main thing.

It’s kind of like Edward Hooper and his paintings…

“Yeah, yeah, yeah. That’s what I try to look for in certain projects, in certain pictures is that feeling of isolation and that kinda eerie creepiness to it.”

What aspect of that isolation drew you?

“…Isolation can be a pretty.

I like to think of it like an open concept and do different things with it. I think it’s an easy emotion for people to relate to.”

“Exactly. It makes them think ‘Huh, I remember this time.’

It’s not like I want people to remember these dark, sad memories but at the same time it’s important to accept that of yourself and grow from it.”

Changing lanes, what do you think you want to do career wise?

“The complete opposite [laughs] — I want to go into advertising and editorial stuff. A sorts of fun, bright pictures.

I want to do stuff like that. Which is really weird because I’m not the best at directing people.

I don’t know what to tell you to do. It’s something I need to fix.

If I want to go into this career, I’m gonna have to do that.

I would love to go into fine art because it’s fun.

It’s just hard. Fine arts, getting into museums that takes a lot, you have to build a huge network for that. Maybe it’ll be something I do on the side. But right now I just sorta wanna settle into something kinda freelance, kinda with one sort of company. I would love to work for Paper Magazine. They always have really trending, interesting covers and photoshoots and I’d love to be a part of that process.”

“Like I said my creative process is fueled on stress and also this feeling of wanting to stand out, even in mediums I am so beginner in.

No matter how hard I try there will be at least five people way better because that’s what they’re best at. For my creative process, I get the assignment and I think about it for a little bit and I hesitate to start anything because just in case something better comes up but usually like my first idea is what I stick with. Which is also a problem.

The day of the shoot, I’ll see that picture in my head and I won’t go any further. Which is terrible because what if there’s something better I could have done because I’m not pushing myself.

I always just have one set picture in my mind and I won’t be satisfied until that is it.”

I was once told by a professor to save your best ideas until your talent matches. Do you believe in this mentality?

“No, with art it’s subjective, and I don’t know how to measure talent and ability. So if I have this image in my head I just assume that I can do it.

You know, practice makes perfect. If you don’t think you can achieve what you see in your head, you have to figure out how to build up to it. But I think sometimes you gotta just do it which I’m sure is the the hardest part.

Finally being able to sit down and take that first step that will eventually help me become a better artist in the future.”

What do you think the next step is?

Part of what I love to do is make controversial work that people can disagree with.

This interview has been edited for length.