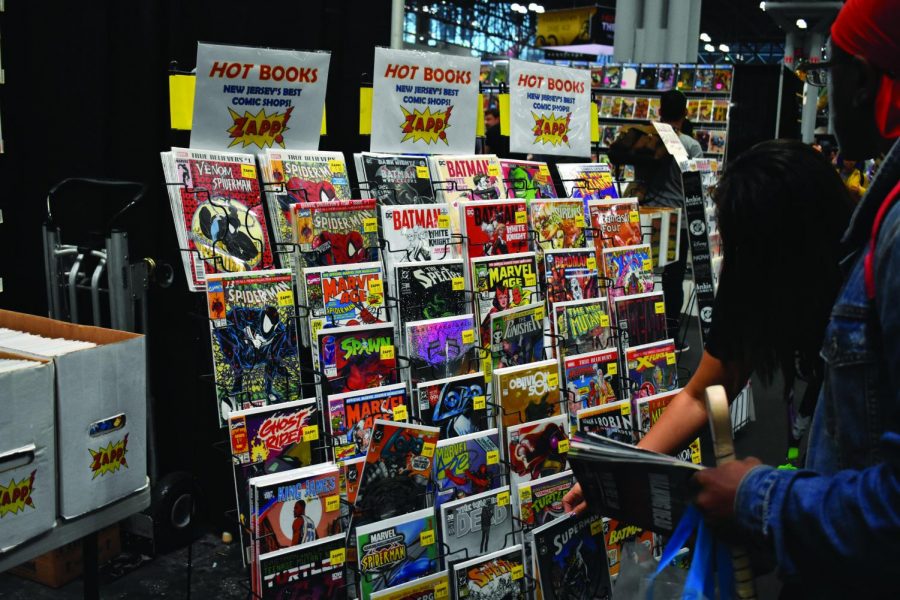 Douglas and my boyfriend attended this year’s NYCC as the Joker and Harley Quinn of DC Comics, respectively.

After dreaming of attending the New York Comic Con for years, I was finally able to experience one of the grandest celebrations of all things nerdy — and even met a St. John’s icon. It was absolutely amazing, but not without flaws.

This year’s Comic Con took place from Oct. 4 to 7, and it was the biggest year yet. Approximately 250,000 tickets were sold, according to Mark Armstrong, the event director of Reed Pop.

One of the most iconic parts of NYCC is the cosplay. Since the inception of the event in 2006, the convention has seen some of the most creative renditions of fictional characters. That’s why I started the Comic Con preparations over summer.

Since July, my boyfriend, my boyfriend and I debated what we would cosplay as. We settled on the Joker and Harley Quinn, with him as Harley and I as the Joker.

Our anticipation came to an end, as, the morning of Oct. 6 finally arrived. After gluing a lime-green wig onto my head and painting my face white, we left Jamaica, Queens and embarked on our journey to the Javits Center in Manhattan.

We weren’t the only super-villains on the subway. The E train also accommodated fellow cosplayers. Among them was Thanos, who recently destroyed half of the Avengers in Marvel’s “Infinity War,” Killmonger, the villain who stole the show in “Black Panther” and Frieza, the evil colonizing alien from “Dragon Ball Z.”

With our Comic Con badges securely clipped onto our St. John’s lanyards, we made our way down to 36th Street and 11th Avenue, where we were shuffled through security rather swiftly. Shortly after clearing security, we found ourselves in a herd of people outside the doors of the Javits Center.

When they said doors would open at 10 a.m., they really meant it. On the hour, the newly opened doors were met with a round of applause and a mob of heroes and villains of all ages rushed into the building.

The first thing on our agenda was to check out the Funko booth. The Funko Pop figurines have been recently taken off, becoming widely known and attracting a huge following.

There are Pops for almost every fandom out there. From Disney princesses to NBA players, Funko has a miniature version of almost anyone and anything. That’s why the Funko booth, loaded with exclusive NY Comic Con Pop figures, was quickly met with a door-busting line and ran with a degree of efficiency where fans were ordered to stand against the wall and representatives discouraged anyone who wasn’t making a purchase to vacate the area.

The environment around the booth was a bit too hostile, so we decided to check out neighboring — slightly less commercial — vendors to see whether they had Pop figures. Surprisingly, almost every booth had Pops, even the advertised Comic Con exclusives. After we realized this, it made the chaos of the Funko booth and its scary line seem effectively pointless.

After we gathered enough Pop figures to start a small army, we headed to the “Dragon Ball Z” exhibit. This was another anticipated feature of NYCC and was advertised as the Dragon Ball North American Tour. Shenron, the dragon floating above the exhibit couldn’t have made me, a Dragon Ball fan since second grade, any happier. In this section, fans could get their hands on exclusive Dragon Ball merchandise, take pictures with their favorite characters and even ride on Goku’s flying nimbus.

It was exciting, and I readily took a million pictures with Vegeta, but it seemed the exhibit’s extravagance was poorly masking the fact that it lacked any exciting features besides photo opportunities.

After leaving the Dragon Ball section, my boyfriend sifted through bins of vintage comic books, while I checked out some of the other cosplayers and even posed for some pictures myself.

The friendly culture at Comic Con and the sense of comradery among  people with mutual interests is an incredible experience.

After my boyfriend found “Nightwing #1” and “Justice League of America #1” for a good bargain, we headed to Artist Alley.

Artist Alley was tucked away in the basement level of the Javits Center, but compared to  the chaos and unnecessary grandeur of other exhibits, it was the gem of New York Comic Con. Rows of original artwork and arcane comic series filled the floor.

Not only were my boyfriend and I able to take home some cool artwork of our favorite characters, but we also got to meet the creators of the graphic novel “Black,” and ran into celebrity and St. John’s University alumnus, Darryl McDaniels of Run DMC.

McDaniels, who is an icon in both the hip-hop and comic book industries, was happy to speak to St. John’s students. When asked how students can get into the comic book industry, McDaniels said they need to have a “hip-hop mindset.”

“You can create something that you give away. It don’t have to be a main story, create a throw-away story. Circulate it so people can understand what you’re trying to present to them,”” McDaniels said.

He then explained that he adapted this approach from the hip-hop scene.

“The reason I say that is, before Drake and Jay-Z and Run DMC and Grandmaster Flash existed, we hip-hopped in the park for free … think of who you want to see and experience your universe and create something that you can give to them so that when you do put it up for sale, they come,” McDaniels said.

After our haul at Artist Alley, we returned to the main floors and attempted to check out the South Park Escape Room, but were discouraged by the massive line. Other big booths and exhibits had a similar feel to the Dragon Ball tour; the physical appearance of the exhibits was spectacular, but was all they had to offer.

After experiencing the top-level exhibits and trickling down to Artist Alley where I thoroughly enjoyed myself and met some great people within the industry, my assessment of this year’s NYCC was that the main attractions were somewhat overrated — but compensated for through the energy of the cosplaying community and the splendor of Artist Alley.