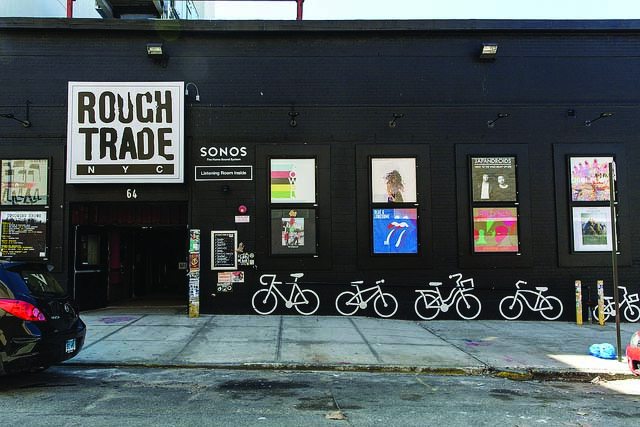 Everyone moves to Brooklyn, specifically millennials with tattoo sleeves and thrift shop fashion senses — or so people like to say. While they are the punchline of many jokes, the creatives of this borough work together to form a blossoming underground art community, a thriving DIY music scene for all.

Williamsburg and Bushwick boast plenty of concert halls, each one just as unique as the next. Baby’s All Right serves a great brunch restaurant, Brooklyn Bowl doubles as a retro bowling alley and venues like the former Silent Barn sprawled for what seemed like unending city blocks. They are the second homes of an endless collective of indie rock and hip-hop musicians with down-to-earth lyrics and innovative, sonorous harmonies.

The Silent Barn in particular was a safe space for droves of artists and young supporters. An article from Pitchfork details the immensity of the venue: A three-story gallery, performing arts space and music education charity, plagued for years by exorbitant maintenance costs. That is, until a notice posted on their website on Mar. 13 detailed their inevitable closure in April.

In its conclusion, the letter said, “When we shut these doors for good, the community that has been forged around the Silent Barn will not be gone.”

And thus, the performers of the Brooklyn scene moved on to other spaces. What else could have the eccentricity, intimacy and the inclusivity of the Silent Barn without burning through the budget? Perhaps the answer to this question lies not in a replica of the venue, but rather in the New York City incarnation of London’s Rough Trade: It is the city’s largest record store, and so much more.

A statement from the store describes their place in the scene: “Rough Trade first opened in 1976, [in] West London, on the doorstep of punk. Fundamentally, our stores provide creative, independent minds a shared place of discovery and congregation.”

It makes sense that this foreign export is monumental enough to schedule performances of all genres touring from around the world. In billing their opening acts, however, they take great care in recognizing up-and-coming Brooklyn Bandcamp sensations and Silent Barn regulars alike.

Take gobbinjr for instance, a Wisconsin transplant whose frontwoman, Emma Witmer, has been a name in the scene since her first release in 2015.

On Oct. 7, she and fellow female-fronted indie group, Daisy the Great, acted as openers to a show by headliner Sidney Gish, a New Jersey-born, Boston-based singer-songwriter. Gish has already established herself as an artist on the rise among many collegiate DIY communities by performing the brutally honest pop tunes that she first penned as a high schooler in this very metropolitan area.

Playing the catchiest songs from her breakthrough record “No Dogs Allowed,” her relatable lyrics about Generation Z loneliness and world-weariness resonate in the form of undeniable ear worm hooks (see “Sin Triangle” and “Impostor Syndrome,” two textbook examples of the genre).

But what made the night’s set complete was the amount of admiration all three acts shared for each other. Beginning with Daisy the Great, lead singers Kelley Nicole Dugan and Mina Walker utilized their jazzy vocals, folk sensibilities and fun stage dancing as teasers of their upcoming album.

Their chemistry as a group tied into the passionate words of songs like “Company.” Right after, gobbinjr came out with a vengeance, dedicating glittery, innocent-sounding tracks “Politely” to the likes of Supreme Court Justice Brett Kavanaugh: “The only gaze of a man that I’d like to meet is that of a man who has respect for me.”

But she held the utmost respect for her touring band and the other performers of the night, a self-proclaimed Gish-head.

In essence, the Brooklyn DIY scene is efficacious and all about love and tolerance.

Every musician who played shuffled back and forth from stage to merch booth, selling their work, hugging every fan who complimented them, making a point to connect and converse.

They transform the space around them, wash the crowd in emotion and make a huge shop like Rough Trade seem miniscule. It usually only takes a small donation or a 20 dollar ticket, but it is not just for a concert — it supports a community that deserves to survive.