Students Come Together to Express Themselves in The Slam Round 2 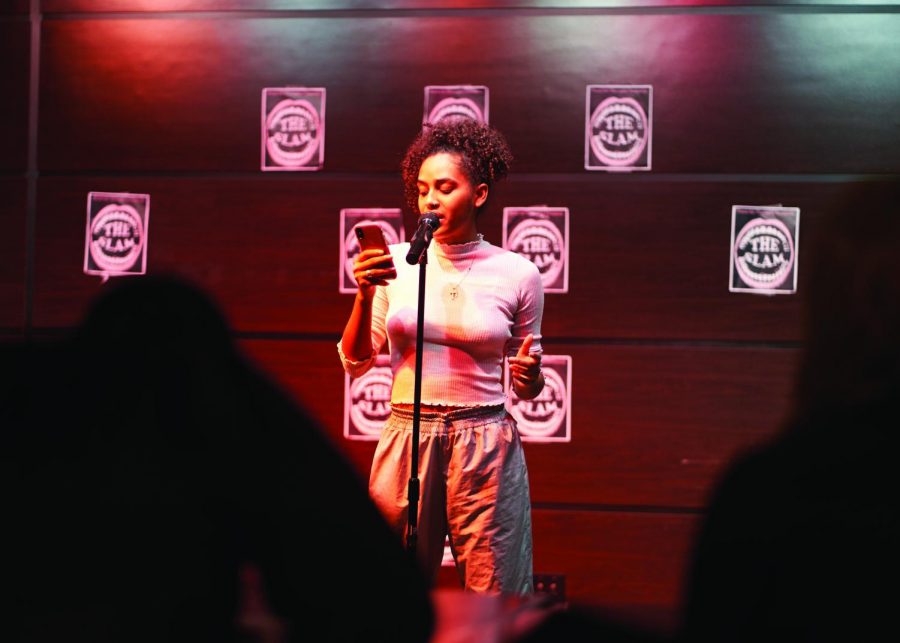 Different shades of blue and red light cast down on students who stood at the microphone, as they poured everything they had into the instrument. Emotion poured out of their mouths, spreading throughout the room and into the audience.

This powerful event was the poetry event known as “The Slam.” On Oct. 8, the poetry club Food for Thought held their second preliminary slam in the DAC Coffeehouse. “The club was formed to allow people to share their voice in an intimate and safe environment,” Tamera Garcia, one of the four founders of Food for Thought, and Food for Thought president said. “It’s a great place for poets to come together.”

After semifinals, the final slam will take place on Nov. 8. From there, the top five winners will go to CUPSI, also known as the College Unions Poetry Slam Invitational, an international poetry contest. This year, CUPSI will take place during the spring semester in Houston, Texas.

There were five judges at this event, all of which were students, who rated each the poet on a scale from 1-10. Out of these five different scores, both the highest and lowest score are dropped out in order to rule out any bias. The three leftover scores then count for the poet’s final score.

Anyone who loves poetry could be a judge. This was sophomore Tolu A.F.’s first time judging. “Poetry is a fun musical expression; it shows what a person is feeling on the inside,” A.F. said. “This is good because it gives students a chance to express themselves in various art forms.”

The second preliminary of The Slam started off with the SAC poet or the first poet of the night who is there to set the mood and make all of the other poets feel comfortable.

The competition included 20 different poets in total. Contestants could read from paper, their phone or talk off of  the top of their head.

Poetry is an art form that helps many students. It’s a way for students to release their emotions into something that shows their voice. For senior Eboney Gilsaint, performing is nothing new to her. In high school, she was on her speech and debate team and was also involved in drama. “Performing a drama does make you vulnerable. But performing your poetry is a different dynamic because it is your own words. Your life is your work,” Gilsaint said.