“The Hate U Give” Gives Power Beyond The Page 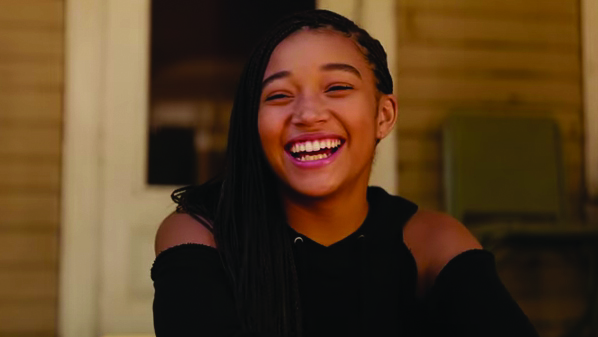 Amandla Stenberg stars in the new film “The Hate U Give” as 16-year-old Starr Carter.

Rapper Tupac Shakur explained this acronym as, “The Hate U Give Little Infants F—- Everybody,” compartmentalizing the cyclical sins of societal violence. This is something we, especially in America, know all too well. “The Hate U Give” by Angie Thomas took this philosophy and wove it into a 464-page young adult novel.

“The Hate U Give” is told through the perspective of 16-year-old Starr Carter. The story follows her life as a black teenager and how she is suddenly drawn to activism after she witnesses the police shooting of her childhood friend. Thomas masterfully sews aspects of the black experience into each line of the novel, especially that of the young black woman.

The four elements: code-switching, interracial dating, police brutality and activism make up Carter’s experience. Although this may not be what every black person in America goes through, there is a 100 percent guarantee that a black person has knowledge of these things indirectly.

The genesis of “The Hate U Give” stemmed from Thomas’ emotional response to indirectly witnessing police brutality. As a creative writing student at Belhaven University, Thomas took from her own personal experiences and those of the wider black experience, to write a short story called “The Hate U Give,” inspired by the murder of Oscar Grant in 2009.

On Oct. 19, the novel “The Hate U Give” was brought to life on the big screen, adding further weight and power to its words. Words on a page leave imagery to the imagination, but when those words are brought to the third dimension it makes the characters’ reality your reality. Cutting the fat of black trauma off of “The Hate U Give” and revealing the meat of it, the audience sees a regular girl become a warrior for change; they see a strong black family and they see the power of the black community.

Director George Tillman Jr. and Thomas serve as anchors of representation that showcase how impactful storytelling can be when it comes from those who directly relate to it. This allows for a more authentic comprehension of the art and reality that is not littered with stereotypes.

In “The Hate U Give,” the world is finally hearing a voice that has always been faint in media: The young black woman. Carter represents a young black woman using her voice to speak out against injustice. She shines a light for other young black girls  — and boys — to feel inspired. Of course, the concept of using your voice can cross racial differences, but when it comes to matters of race and systemic violence, specifically against black people, it is important for a young black woman to know the power of her voice and see it in action. When the woman who has been disrespected, unprotected and neglected uses her voice as a form of resistance in a world that does not want to hear her, she will roar.

Change is not a sprint, it is a marathon. Thomas and Tillman Jr. use art as a form of activism and through “The Hate U Give,” this art has the power to inspire young people to do the same. That is the ironic thing about cycles, they represent both stagnation and change, and it is up to the person and how they use their voice to break that cycle or enhance it.