“I Took a Walk Through this Beautiful World” 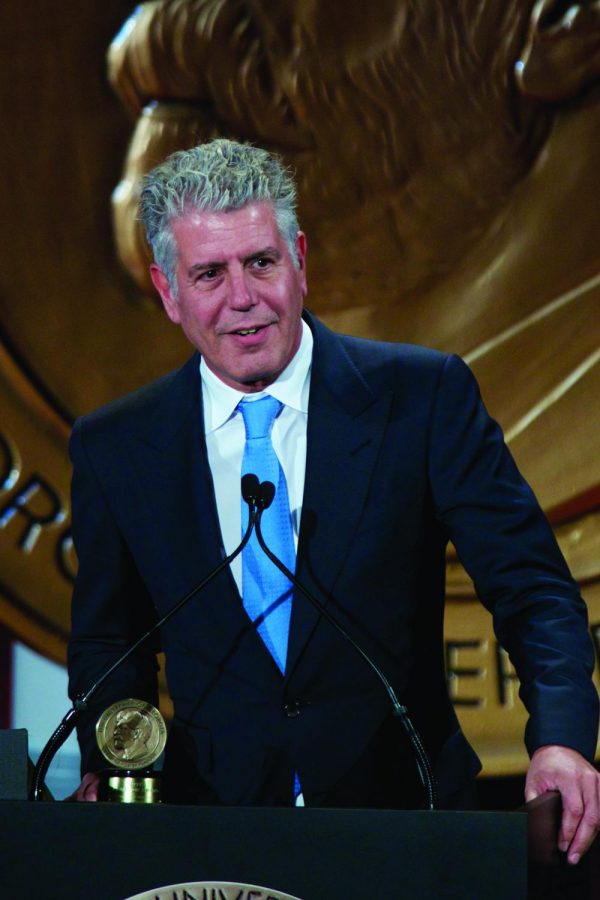 Opening shot: B-roll of a Southern Italian woman singing in a crowded market. Historical footage of 1970s New York. A woman carrying produce in the fields of Hanoi.

Before the title sequences began, chef and writer Anthony Bourdain was able to capture his audience’s attention in CNN’s “Parts Unknown.” On Nov. 11, episode seven of season 12’s ending credits marked the end of an era for those who delighted in the inquisitive and stubborn host’s travels across the globe in search of culture, history and good food.

Season 12 sought to bridge the gap between the audience and the man behind the screen even further in the wake of his passing in June with inclusions of episodes focused on his impact and the behind the scenes production of the show.

The series was built on a simple model. Travel to a place, find the food and talk about it for the audiences back home. When “Parts Unknown” began, travel shows of the time, such as any of Samantha Brown’s multitude, aimed at what to see and where to visit. Bourdain’s was grittier, seemingly uncut and resolute in its quest to encapture the place through the people that shaped it. Each episode had meticulous thought behind it — inspired by a film or piece of music, specifically shot and edited in that style.

Bourdain never claimed to be a journalist. In fact, he shied away from that title, calling himself a “lucky cook that gets to tell stories…a storyteller.” Nevertheless, he acted as a journalist when he brought a platform to the stories of those lost in the noise. One of his most memorable episodes, the sixth of season four, saw Iran and its people in a way not actively being shown by the American media at the time — as people. He wasn’t afraid to be proven wrong or change his opinion. Yes, he enjoyed luxury, but he took special measures to highlight the food, voices and culture of the working classes as well. For it is in these people, that the struggles, accomplishments and culture of a country can be best understood.

A meal represents an agreement, a familiarity, a common ground between different people. Bourdain used that commonality to ask hard questions about a country’s history and current state. He bucked against “stovepiping,” what he described as production trying to sway the conversation in a certain way, and ended scenes by saying “go wide.” He refused to take direction or listen to the convention of “action” and “cut.” “Take two? We don’t do take twos,” Bourdain said to his crew in the South Pole. His conversations with people were tantalizingly authentic and real.  Audiences listened as individuals shared what they loved — their home — while believing firmly in the good that can come from the bad.

The last episode of “Parts Unknown” did just the same thing on the Lower East Side of Manhattan, a place near and dear to Bourdain’s upbringing during the 70s and 80s punk and hip-hop movements.

Bourdain showed audiences his old haunts, what areas he used to avoid and shared meals with some of the icons of that generation, including Blondie’s Debbie Harry and Chris Stein. He shared a meal with actress and writer Lydia Lunch, whose colorful language and wit kept up with Bourdain’s own in a way I hadn’t seen before. A simple, short, wordless feature on the Mosaic Man, Jim Power, who glues small pieces of tile to the street signs of the Lower East Side, was powerful enough to remind you of the beautiful people still left in the world.

Some viewers were unhappy about the final season as a whole — noticeably missing the narration of Bourdain in post-production. Even more disagreed about the jumpy, chaotic editing of the last episode. On the first note, I agree; there was a strange absence created by the silence between scenes, made all the more disquieting on the knowledge of why. But on the second criticism, I disagree. Bourdain loved film and music and wished that every episode would fit the style he was emulating. To make the last episode somber and without the characteristics of 70s student arthouse films it emulated, would have been an affront to the series as a whole.

The final episode ended in a fast-paced montage of the Lower East Side and its people, overlayed with the Johnny Thunders’ “You Can’t Put Your Arms Around a Memory.” As the credits rolled, it is hard not to think that this show continues on in the people it touched, the stories it told and the world it opened up.

Bourdain’s last meal was a simple one. An ungarnished hard-boiled egg prepared by painter and musician John Lurie. So ironically Bourdain and so poignant in its meaning. For Bourdain and “Parts Unknown,” it was always the people that made the food what it was.