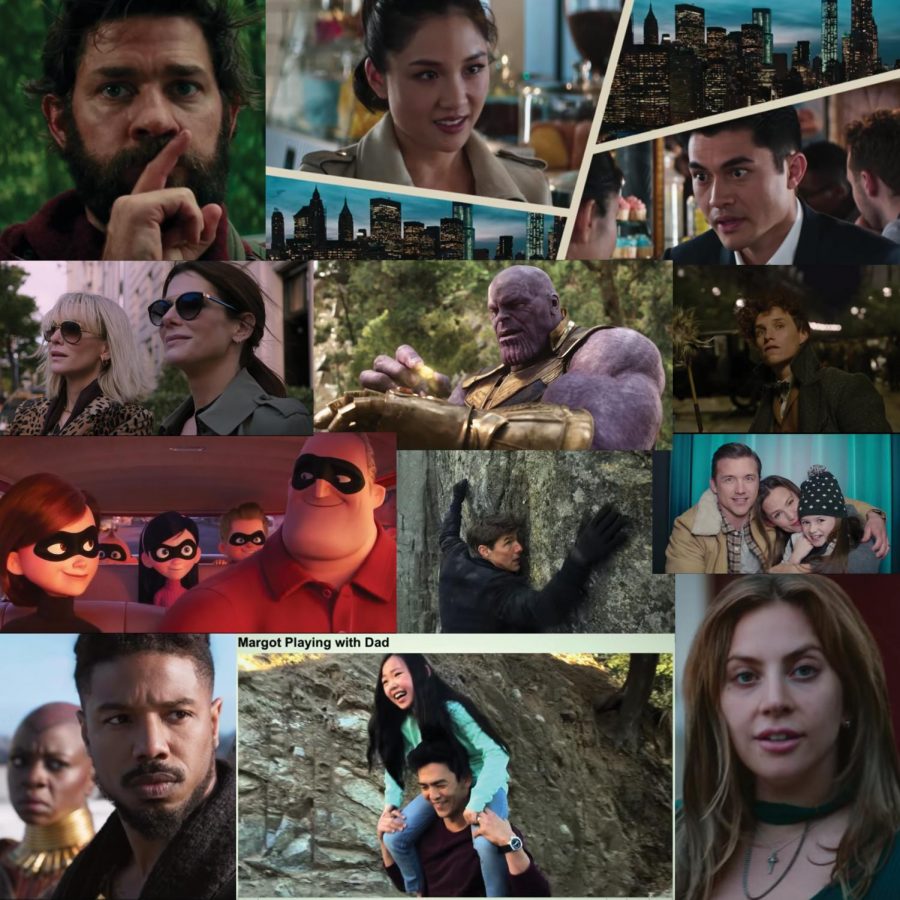 “A Quiet Place” is the most unique film of its genre for 2018. This mostly-silent horror film was a step in the right direction for deaf actors (and nightmares of monsters with acute hearing for others). Directed by (and starring) John Krasinski and his wife, Emily Blunt, this film intriguingly incorporates American Sign Language within the horror genre, and this thrilling experience not only gives you the chills, but also raises awareness about ASL and opens doors for other deaf actors in the industry. It is a silent-but-deadly film that will have you holding your breath until the very end.

This movie wins the “Most Anticipated Film of the Year” award. Millennials waited 14 years for this sequel to be produced. The first movie ended with the Mole surfacing and threatening the city; now, Elastigirl is a fulltime superhero while Bob is a stay-at-home dad. The iconic red suit is replaced in “Incredibles 2” with a gray/black suit for Elastigirl, which radiated  a cold and distant vibe. (Red definitely suits the family better.) I loved how cookies were the only thing that would calm Jack-Jack down and bring him back to the current dimension/prevent him from turning into the scary purple monster. The dangerous villain this time around is Screen Slaver who hypnotizes his/her victims and represents all the electronics that we constantly have in our face. Portraying social media/electronics in a negative light was a prevalent theme throughout  movies produced in 2018, and “Incredibles 2” had a unique twist to this societal obsession.

“Fantastic Beasts and the Crimes of Grindelwald”

To be honest, I felt obligated to put this movie on my list since I am a Potterhead (Slytherin to be exact). I was unconditionally and irrevocably confused with the plot of this film. So many details were left out and some things just did not add up; it was an unsubstantiated and disconnected plot. However, the design and action of the film was stunning. Special effects always gets a round of applause for the visually pleasing magic effects, such as the scene eradicating the blue flames of Grindelwald. It earned about $650 million on the box office, but it had the potential to be more successful, had the plot holes been sealed. The third installment in this series has a lot of explaining to do, and hopefully it will not disappoint.

Tom Cruise is back as Ethan Hunt in MI6 with this fast-paced, plot twisting, action-packed installment that did not disappoint. Each of Hunt’s adventures are unique and exciting. This series does not have the “plot-dragging” issue that many movies face when they have reached a certain number sequels. The 56 year old actor still performs his own stunts, and it seems as though the older he gets, the more dangerous and outrageous stunts become. For example, the Paris motorcycle chase in the movie was Cruise free-riding at 100 mph! I’m too to scared drive faster than 45 mph (that too on an empty road.) Ethan Hunt is always five steps ahead of everyone else in the movie, and trying to keep up with him and his team is mind-boggling, but their plans are always creative and spontaneous, which is what is keeping this franchise alive. This movie is definitely worth the watch.

What are the chances that your partner turns out to be “Prince Harry” of Singapore? For most of us it is 0 percent, but for Rachel Chu (played by Constance Wu) it is 100 percent. This much needed, heartwarming film has the first all-Asian cast since “The Joy Luck Club” in 1993. It is a romantic comedy that has you living and breathing in the beautiful sights of Singapore without ever leaving your seat. This movie tackles many issues Asian-Americans and other immigrants face, and plays a crucial role in encouraging representation in Hollywood. Immigrants often struggle with their sense of belonging in America and in their home country. As Awkwafina sums it up in the movie, “She just thinks you’re some like, unrefined banana. Yellow on the outside, and white on the inside.” This relatable story (except the rich part) is a must-see.

This modern-day missing person case is every parent’s worst fear. Social media has its pros and cons, as it connects people from all over the world while also linking you to strangers with fake identities. Presented entirely through/on computer screens, “Searching” adds a new spin to the classic whodunit mystery. This thriller was directed by 27 year old Indian-American filmmaker, Aneesh Chaganty, and also casts Asian- Americans in lead roles. This film plays a crucial part in Asian representation in Hollywood both behind and on camera. It received critical acclaim in the U.S., but was more success on an international level.

The reaction to both of these films dramatically contradicted each other. On one hand, people loved “Black Panther” and had everyone saying “Wakanda Forever” by the end of it. Meanwhile, “Infinity War’s” audience is crying and shouting at the screen (and at Marvel) for killing off their beloved heroes, the most heinous crime yet. However, “Infinity War” is the third most expensive film of all time and made over $2 billion in the box office. Nevertheless it was 200 minutes of glory, because it unified 10 years of MCU stories. Similarly, “Black Panther,” MCU’s first black superhero, did very well at the box office; it earned $430 million in the first two weeks and was even nominated for seven Oscars. I loved the character Shuri, King T’challa’s sister. She is a strong, resourceful and intelligent young woman who is not only a Disney Princess, but also a formidable opponent in the tech world.

Since its debut at the Toronto International Film Festival, “A Star Is Born” has provoked the kind of mania rarely seen in even the feverish realm of a film festival. It’s been hailed as “a transcendent Hollywood movie” (per Variety) and “damned near perfect” (per Rolling Stone). The fact that the songs in the film were performed live makes it even more special. It was amazing to see Lady Gaga (Stefani Germanotta), without the extravagant, statement-making outfits in her first leading role in a film. This was the perfect script for Bradley Cooper to make his debut as a director. It has just the right amount of emotion, complexity and inspiration that the audience can hold onto until the very last minute!

Eight strong, confident and talented women replace the decade old Danny Ocean (played by George Clooney), adding a very much needed 21st century twist to this genre. Sandra Bullock plays Debbie Ocean, who has been planning the most expensive and public heist yet, recruits experts in their fields played by Rihanna, Cate Blanchett, Sarah Paulson, Mindy Kaling, Helena Carter, Awkwafina and Anne Hathaway. Although such a heist is unlikely to carry through, the MET was an interesting institution to intend to rob. These women managed to steal more than $150 million worth of diamonds — more than any thieving man could ever imagine stealing. They are also much smarter than any male counterpart in this genre; they know what they are doing and no one can challenge that. Hathaway’s character was not initially involved in the heist, and I loved when the twist was revealed, along with the other half of the plan that no one was cued into — that the rest of the diamonds on display at the MET were also part of the heist. This all-female crew thriller was entertaining and certainly, surpassed the expectations of a remake.