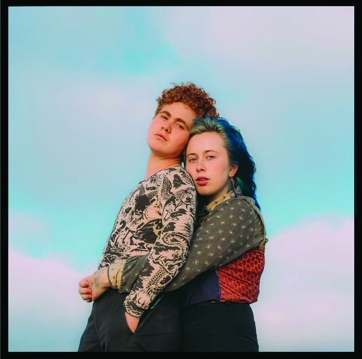 Girlpool is comprised of friends Harmony Tividad and Cleo Tucker.

Girlpool: “What Chaos is Imaginary”

Girlpool’s latest record, “What Chaos is Imaginary,” begins with a thud.

It is a thud, a crash and a woozy reverberating guitar that signals the album’s beginning on the opening track “Lucy’s,” and with this, it marks a career shift for the still-young Los Angeles based duo.

A lot has changed over the years for Girlpool. They have seen the release of two full-length records, moved between hometowns and made their own personal realizations. “What Chaos is Imaginary” is the first project released by friends Harmony Tividad and Cleo Tucker, upon Tucker coming out as a transgender man and beginning hormone replacement therapy. On the single “Hire” he sings, “Will I make the matinée with my newest life and be that bright time?”

This self-actualization is something that makes their latest feel so much more complete than their past projects. The most notable difference is that their classic indie-guitar-rock style has matured into a gauzy, Beach House-sounding dreamscape. Full string sections, echoing chords and booming drum machines that cut in and out allow this difference to be heard (the title track and “Roses” demonstrate this with nostalgic detail).

Aside from this, there is an emotional quality and a newfound distinction between the vocals and lyrics of each member’s songs. In between walls of sweet noise, the pair — who are known for layering themselves on every track — become even more unified in finding their own distinct styles and learning to sing individually.

“I’m not a dreamer in their prime/I’m consistently not worth your time,” Tividad says on the bitter but relatable “Pretty.” They discuss tough topics and bounce back and forth, expressing it to each other like the friends that they are. It is a new beginning for Girlpool, but it still feels like old times.

It has been 10 years since the classic experimental group, Animal Collective, released their stunning indie-pop breakthrough, “Merriweather Post Pavilion.”

During the past 10 years, the band has released plenty of projects to varying critical acclaim, including a handful of solo albums by their founding member, Avey Tare (real name David Portner).

The recent was 2017’s “Eucalyptus,” which pared down on Animal Collective’s electronic and frenetic rhythms in exchange for hypnotic acoustic-driven tracks inspired by mornings in Hawaii and California’s Big Sur Mountains.

During the time in which “Eucalyptus” was recorded, Portner wrote another album, and if the  lead single “Saturdays (Again)” indicates anything, it could be an even better full-length.

The song begins with a droning buzz — almost a mooing noise — and the hollow acoustic guitar that shone through his previous solo work morphs into a work with a much faster and steadier tempo that is steeped in nostalgia and percussion samples.

The addition of more guitar and bass work on this track harkens back to former Animal Collective projects — in particular the woozy lushness of their 2005 record, “Feels.”

It is catchy, but still emotional and complex in music and word. Portner whispers as he recalls time passed: “But I do know why/It would never quite function for Mondays/’Cause they remind me of those Saturdays.”

“Saturdays (Again)” is a song that exists in the giant, abstract shadow of its legacy from all of those years ago, but it still stands on its own as a nod to the past and a glimpse into the future.

The album, “Cows on Hourglass Pond,”  which features “Saturdays (Again),” will be  released on March 22 via Domino Records.