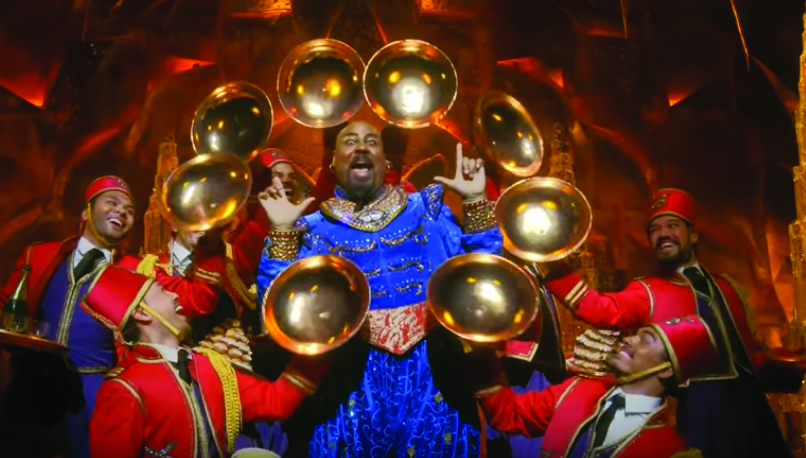 James Monroe Iglehart as Genie in 2014 singing “Friend Like Me” in the Cave of Wonders.

Disney’s legacy lives on not only through its animated classic tales, but also on the Broadway stage. From “Beauty and the Beast” to “Frozen,” Disney has won the hearts of millions — including mine. Broadway’s adaptation of the 1992 Disney classic, “Aladdin,” is directed and choreographed by Casey Nicholaw and is still running from its 2014 opening.

The musical brings the audience to the bustling desert town of Agrabah, where the Genie sets the scene for the audience before “returning” to his lamp. The night of my attendance Feb. 20, the incredibly energetic Genie was played by Michael James Scott; the nefarious Jafar by Jonathan Freeman; the smart and beautiful Jasmine by Arielle Jacobs and the street rat-turned-royal Aladdin by Ainsley Melham. Surprisingly enough, Freeman actually voiced Jafar in the Aladdin franchise, and brought his  version of infamous villain to the Broadway stage, making his performances and Jafar’s character even more special for the audience.

Due to obvious limitations, the cast and plot were slightly adjusted to be deemed fit for limitations of theater. For example, instead of Jasmine’s pet tiger, Raja, there were three attendants played by Alicia Charles, April Holloway and Ariel Reid. The role of Aladdin’s sidekick, Abu, was replaced by three friends named Babkak (Brian Gonzales), Omar (Brad Weinstock) and Kassim (Mike Longo.) Jafar’s sidekick/parrot, Iago, was played by Don Darryl Rivera. In a comedic attempt to reference Iago’s true animagus from the film, Jafar yells at Iago, “Stop parroting me,” when Iago goes overboard with his echoed evil laugh.

The last scene in the movie, when Jafar (the master of the lamp) becomes the all powerful sultan-turned-snake-turned-genie, was shortened to simply Jafar the sultan-turned-genie on stage. However, to compensate for the abridged scene, Jafar had a quick — but stunning — costume change from a pure white to a furious red attire that caught everyone’s attention.

Throughout the musical, Genie and Iago proved to be the  best personalities on stage. They were both lively and entertaining, whether it was by making modern-day references or filling the stage with a high-pitched evil, yet bewitching laugh. Genie broke the fourth wall in the beginning of the musical and kept everyone engaged and involved throughout by turning and talking to the audience in the Cave of Wonders. He won our hearts when he sang  “Beauty and the Beast” and snippets of songs from other classic Disney films as he introduced himself and his powers to Aladdin. His magical entrance after Aladdin rubbed the lamp caught everyone by surprise. Through the strategic use of a trap door, it truly seemed as if he emerged from the golden lamp with smoke and all.

The costumes throughout the show were extravagant, colorful and sparkly (as per the Swarovski crystals on the costumes!). It would have been lovely to see the roles of the  protagonists and supporting characters played by Middle Eastern actors, since their role is characterized by their ethnicity. “Aladdin” is known to take place in a fictional Arabic town, thus the royals and the public within the musical should reflect that cultural identity. Nonetheless, the cast put on a wonderful and breathtaking performance. The two hour and 30 minute musical is definitely worth your time!