The Torch attends “No Shade” panel on colorism 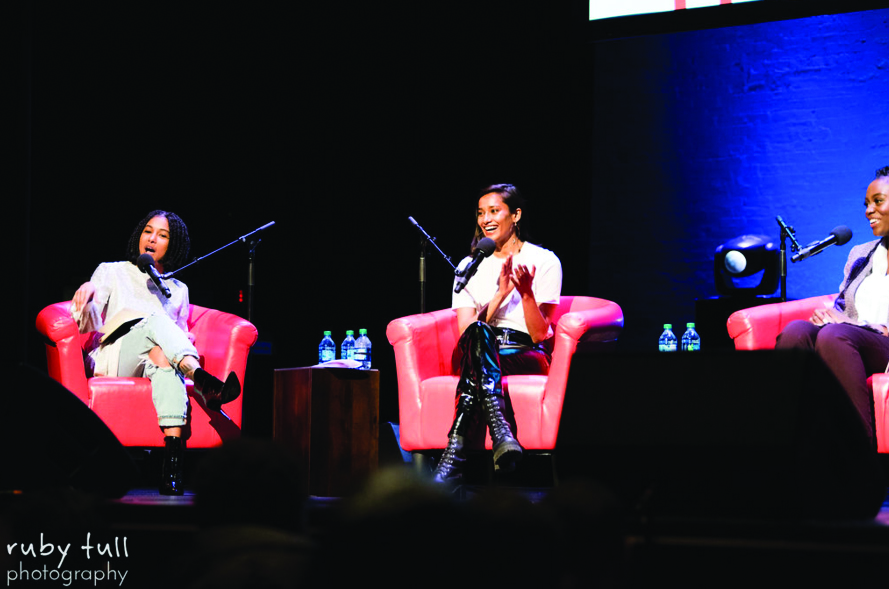 In honor of Women’s History Month, the legendary Apollo Theater and WOW Foundation partnered to bring the “Women of the World Festival.” This festival which ran from March 12-17, included workshops, programming, performances and panels with a variety of topics that discussed prevalent issues that affect women, women of color and teens based in NYC.

On Sat. 16, a discussion titled, “#NoShade,” was held and featured diverse conversations on the heavy topic of colorism. From the very beginning, the event was one that brought a light-hearted tone to the serious topic as the Apollo Theater was filled with young students from all five boroughs, and attendees were urged to use social media to post and comment during the discussion.

Hosts Malcolm LaVaughn Robinson and Ken Fredericks described the panel to the audience as one that, “will explore the impact colorism on a global scale and its influence on local communities.”

“Unfortunately shade representation and colorism in the media both traditional and modern has been a challenge for what has been too many years to count,” explained LaVaughn Robinson.

At the start of the program, duo Nia and Monica Soyemi, known as The Soyemi Sisters, performed a mash-up of songs that evoked respect and love of their black features and identity, featuring songs such as Solange’s “Don’t Touch My Hair.”

The panel was moderated by Torch Features Editor and St. John’s University student, Beverly Danquah, who is also a Young Producer at the Apollo Theater. Among the panelists were; Nidhi Sunil, Valencia D. Clay, Tori Elizabeth and Janel Martinez, all young women of color who represent various industries ranging from education and fashion to advocacy. The panelists all spoke on varying personal stories of colorism from different perspectives of the Asian, African and Latinx community.

Often times, the ideals of colorism and hatred toward one’s features in the community are taught at a young age. “A lot of times we grow up as people of color being taught that we’re not enough, being taught that our features aren’t beautiful, things that we are naturally born with,” explained Tori Elizabeth, founder of “The Colored Girl.”

Clay, a Baltimore Design School teacher stated similar concepts in what she saw in her young students when they were too afraid to speak in their native languages.

“Somebody told them not to do that because they were taught to assimilate, but what happens when we teach our children to assimilate, we teach them to hate themselves, and they don’t know that they’re hating themselves, so they project that on others. So now we’re building self-hate on top of self-hate.”

Learning herself, Clay described how she was so upset to see how her students were acting toward their own identity and shared that a friend of hers guided her, saying, “You can’t be mad at what they don’t know, you have to teach them.” The Harlem-raised teacher encourages the conversation on colorism, stating that the need for better education and the discussion of these issues need to be included in the curriculum. A model and philanthropist, Nidhi Sunil described how being born and raised in India, she saw a lot of colorism toward the darker-skinned people, and she sees this type of colorism with her work in the fashion industry almost every day. “It has to be said that the idea and concept of beauty for the longest time has been white, and you see this a lot growing up in Asia. We have a unique problem where we hate our own skin color and one of the biggest markets in India is bleaching products. Being brown or black is not inspirational.”

Sunil originally started as a litigation lawyer, and she gained interest in the fashion industry because, “on some level I knew it was easier to do fashion than dealing with the men, I’ll get to them later.” Still working in law, Sunil fights to work with young women in India to prevent the many instances of murder caused by most families’ burden of raising their daughter — including dowry for marriage.

A common theme among the panelists and discussion was how to love your skin color and avoid self-inflicted colorism. Martinez, the founder of “Ain’t I Latina,” detailed how she grew up in a household that embraced their black identity and saw the “flip side” in society outside her home, from magazines to television.

She later described how the use of social media and creating online content has shown companies and brands that dark-skinned people of color and those who aren’t represented will do it on their own. “It’s people with their phones, people who are saying, ‘Oh you don’t want to cover us, bet;’ they are going out and doing it on their own. This causes mainstream media and advertisers to pay attention to one of the largest demographic that there is and that’s black folk.”

Having worked with women of all different backgrounds and ethnicities, Elizabeth urged the audience to find beauty themselves: “The advice I would give is find the things you love about yourself and celebrate those, come up with affirmations, when you look in the mirror, come up with ‘I am beautiful I am enough, I am loved.’ These things will then change your mindset so that you no longer feel as if you are not enough as a person.”

The panel showed that the battle of colorism is something that is seen throughout many communities and is a battle worth fighting.

Especially at an event that had such an intense focus on young dark-skinned students of color, the need to love their identity and features was necessarily pushed.

Clay vocalized to the crowd to repeat after her and said, “You are enough. You matter. And whatever you want to define as enough, is up to you.”