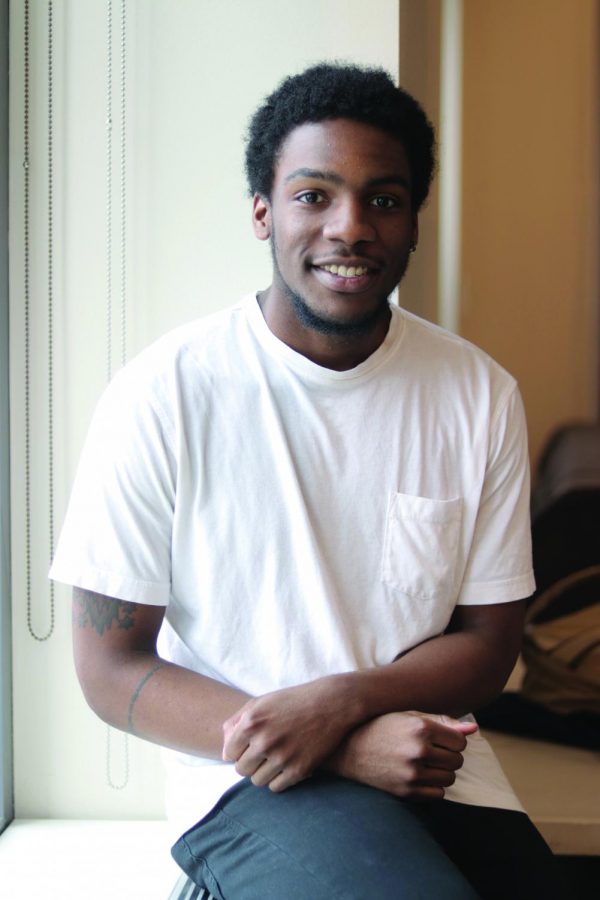 Brandon Mitchell, a senior music major, discusses his passion for transforming everyday sounds into unique beats with the Torch.

At 11 on Tuesday morning, Brandon Mitchell and I met for coffee in the DAC Coffeehouse. Mitchell is a junior at St. John’s, studying accounting. He hails from Durham, NC. Disclaimer, Mitchell opted for an Ethos water, as he’s not a coffee drinker. I had a grande toasted toffee nut iced coffee with almond milk. Beverage conversations maybe?

So Brandon, tell me a little bit about what you do.

“I produce music, I don’t like [to] sing or rap or anything. I would like to go in scoring. My major used to be film and television because of scoring but then I found out that St. John’s does more of the production side of things and directing. I’ve been producing for three and a half years — it will be four this Christmas. I try to put my unique spin on it while recording live stuff. I’ll literally stop if I hear something I like. Like just the other week on that street right there [Points towards parking lot near Gate 6] — there was rain going into a drain and I just recorded that and I’ll put it into a beat. Some of my biggest influences are Monty Booker, Kaytranada, Frank Ocean, J. Cole, Travis Scott, WondaGurl, just to name a few.”

Tell me about your process when you are producing a beat.

“Nine times out of 10 its usually just playing stuff until I get something that I like. I’ll play chords, listen to drum hits, but if I do have an idea, I’ll try to play that out as best as I can. I have this instrument, it’s called an OP-1, I’ve been wanting that for two years, and I just saved up to get it. That’s where I find most of my inspiration. I’ll literally sample radio static — a random channel that I find, just anything really. I joke with my friends when I’m making beats with them I’ll just throw whatever in a beat.”

Sounds to me like (no pun intended) your inspiration comes from your experiences. Like walking down the block and hearing a sound, how do you mirror that?

“I’ll literally just record it and I’ll play around with it in FL studio. It’s not really much to it, I just do it. Shout out to Nike.”

Wait … is there actually a studio there or that’s where you live?

“That’s where I live.” [Erupts in laughter]

Who are your top five producers right now?

“Monte Booker, Kaytranada, WondaGurl, Frank Dukes [are some] of my favorites. [Monte Booker] makes a lot of samples you hear, he’s like a producers’ producer. And another personal favorite of mine is BadBadNotGood. They’re actually like a band, but they produce for people as well and I like their tracks.”

Just from our conversation, I can tell that Monte Booker is your favorite … True?

What do you love about Monte Booker?

“Just the way he uses different sounds. That’s honestly why my beats sound the way that they are. Like just listening to Monte Booker and they way he flips his sound. He’ll take a crackle of a plastic bottle and turn that into a beat or honestly just anything. Which is just crazy. His imagination is just … It’s just out of this world. And I’m really happy right now because he’s finally getting the recognition and more eyes on him. He just got invited to the Revenge of the Dreamers sessions for J. Cole. He’s been producing with Smino for a good minute. They came up together.”

His mind. Have you worked with any artists?

“I’ve been producing on my own for a while. I was trying to hone my sound and fract my stuff. I’ve been working with my friend from back home; his name is Brian McQueen. We’ve just been working on an EP, throwing ideas together and trying to get something solid down before we do it. Nothing too crazy.”

Nothing too crazy … why not?

“I just now started getting confident in my stuff, and I’ve been saying that like every year. I try to work every day to get better.”

Where did the confidence stem from? Where do you think it came from?

“Just recently I recorded stuff around the house. Just like, the sink turning on, my brush –– my rubbing my finger across my brush — literally my boot because it was raining that day and I squeaked it across the floor, lighting a match, random stuff I can get my hands on. When I was back home, my friend’s washing machine made a ding noise and I asked him if we can recreate it, and I recorded it and I turned that into a synthesizer and morphed that into something I can use. That’s where I get most of my inspiration, just trying out new stuff. Trying to make the weirdest sound into something that’s tough. That’s fun to me.”

Top three producers of all time?

Any advice for students who want to sing, produce or get their feet wet in music?

“Biggest advice is to one: Be yourself. Honestly, that’s the only way you’re going to have fun with it. Trying to keep an image and persona that you don’t really enjoy at the end of the day won’t be fun — it’ll start feeling like a job. Don’t be afraid to put yourself out there. Just make sure you’re ready.”

How has your friend and family’s reception been to your interest in producing?

“They’ve been very supportive. That’s really what I’m excited about. There was no backlash. I want to do this as a career.”

[Laughs] “I want to get into accounting to know the business side of everything. Like, I’ll bring it up with my mom and cousins, they’re not telling me I should do something else. They’re telling me to go for it. They say I should’ve been doing this all along.”

How do you reciprocate sounds that you hear?

How are you going to use your St. John’s experience to fuel your passion?

“[I’ve enjoyed] learning about different people from different backgrounds since Durham isn’t that diverse. Coming up here, everyday I see someone from a different background. It’s just refreshing to see. It taught me that there’s more to the world than Durham, North Carolina, or Charlotte or Raleigh. And just enjoying the fact that I can be away from home and I can learn from an entirely different city.”

The full article and Brandon’s work can be viewed at torchonline.com and