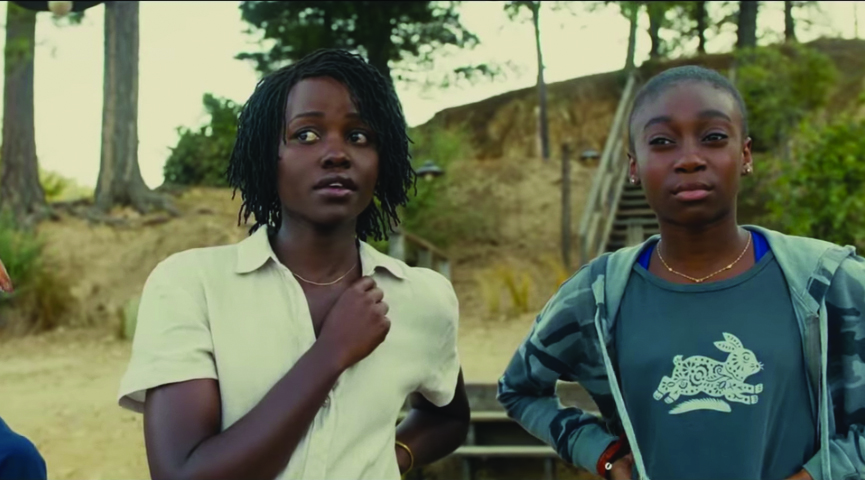 Lupita Nyong’o and Shahadi Wright Joseph star in the thriller “Us,” directed by Jordan Peele.

Following his 2017 Oscar-winning film “Get Out,” Jordan Peele released his most recent horror film “Us” on March 22. Known for his psychologically riveting work, Peele’s use of foreshadowing and symbolism cites an episode of “Twilight Zone” as inspiration for the film. The episode “Mirror Image” centered on a woman who sees her doppelgänger and is paranoid that it’s trying to replace her, is expanded upon in “Us.”

Adelaide Wilson (Lupita Nyong’o), her husband Gabe Wilson (Winston Duke) and their children Zora and Jason Wilson (Shahadi Wright Joseph and Evan Alex respectively) return to their summer home — Adelaide’s childhood home in Santa Cruz. Adelaide’s traumatic memory from her childhood at the Santa Cruz beach resurfaces when she is faced with both her doppelgänger and duplicates of her family in the driveway of their home.

“Us” also happens to be Nyong’o’s first lead role, which she executed flawlessly. She manages to play both the character of Adelaide and Red so well that while they are distinct, they also mirror each other. She is able to channel both the fright and terror of someone battling a doppelgänger trying to kill their family as well as the vindictiveness and anger of someone who believes that they have been wronged.

Duke’s character, Gabe, offers the comedic relief that is a staple in Peele’s horror films.

This film does an impeccable job of building suspense and keeping the audience at the edge of their seats. Peele strays away from a typical horror movie plot and introduces a new terrifying concept, the idea of facing oneself. The film is filled with several twists and turns and as the story unfolds, it is revealed that there is more to these doppelgängers than what meets the eye.

However, under the surface, this film also provides a perspective on the political and social climate of America today. Adelaide’s doppelgänger, Red, says “We are Americans,” when they are asked to identify themselves.

The film holds a mirror up to our society and forces the audience to confront the true evil within this country: Ourselves. We are in an age where we are trained by the media to fear the “outsider.” Perhaps the most outstanding political statement is that the ones we should be the most weary of are the people that we see when we look in the mirror.

Another important aspect in the film is the use of a financially comfortable, two-parent African American family. The family’s race is not central to the plot but it is still significant — illustrating that black actors and actresses are not restricted to only telling black stories. While black historical films are important and so are the telling of black stories, it is important for black people to be represented across genres and to be shown breaking down the barriers of stereotypical “black roles.”

Peele is an expert at mixing horror, comedy and social commentary to make a terrifying — yet psychologically stimulating — film that left the audience unsure of whose side they were on at the end of the film.

“Us” makes a bold political statement, while, it is still being a terrifying and suspenseful horror film.