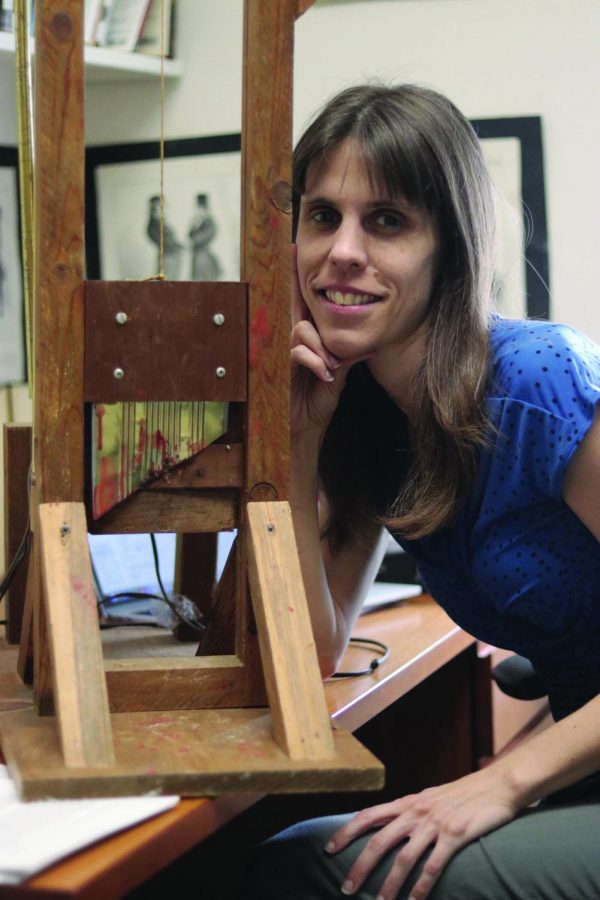 Dr. Erika Vause poses with her mini guillotine and speaks with the Torch about her history selections.

The sight of a miniature model of a guillotine in a professor’s office might be a surprise for some students, but it always sparks a great conversation. The office in question is that of Dr. Erika Vause, a History professor here at St. John’s University who focuses on Europe from the seventeenth to the nineteenth centuries, with a particular emphasis on France. The model guillotine that she constructed is the perfect size for slicing bananas, which Vause reenacts on the first day of her class on Revolutionary France.

Vause incorporates creative methods such as this, role-playing games and choose-your-own-adventure books, into her classes to inspire students to think about the world in which we live through the lens of different cultures and periods in time. It can be easy to take for granted the ideas and institutions normalized around us, but Vause challenges students to think outside of the box.

“Nothing around you is normal,” she explains, “nor has it always been there.”

A St. John’s student that is not involved with the History department might wonder how nineteenth century France relates to their present-day life, but Vause encourages students to look beyond “Les Misérables” (although that is a classic) when trying to learn more about this time in history.

Here are a few suggestions provided by Vause for anyone interested in learning more about French history, or history in general:

In this television series produced by BBC, restaurant critic Giles Coren and comedian Sue Perkins immerse themselves in the culture, fashion and food of a particular location and historical period for a week. Over this period of time, while they tend to sample cuisine that was available to different social classes during a given time, many episodes focus on the extravagant meals present during the era. The show has since been revamped under “Supersizers Eat,” and in season two, episode three Coren and Perkins focused centered on Versailles on the eve of the French Revolution. Vause recommends this show because it reveals what we consider to be unfamiliar and weird today, while drawing attention to the fact that it was completely normal in a different place and time. It presents a lighthearted take on the past and incites the viewer to learn more about a given historical period.

This podcast deals with non-fiction scary stories, investigating true and terrifying events and the myths associated with those accounts. It is perfect for those who like thrilling horror stories and are interested in hearing about true events of the past. Episodes deal with topics such as witches, cannibals and murders. In episode 8, entitled “The Castle” the podcast explores the serial killer H.H. Holmes, who built a hotel to facilitate the murders and hide the bodies. This particular podcast uncovers the “darkness of human history,” according to Vause, which makes it creepier. Vause advocates for this podcast as a way to get students  interested in factual historical events through storytelling.

“A Place of Greater Safety”

Vause recommends the Japanese thriller, “Rashomon,” to help students grasp the “unknowability” of the past. Although it is not historical, it deals with people highlighting different elements of the past for emotional reasons. The plot of the film centers on discovering the truth about a woman who was raped and her husband’s murder. Each character in the movie tells a unique version of the story, which reminds the viewer that when studying history, one must take into account the motives of the people behind the telling of a story.

Another intriguing podcast is “Behind the Bastards.” As the name might indicate, it deals with the worst kinds of figures, such as Saddam Hussein and Joseph Stalin. It uncovers bizarre facts about different “bad guys” of the past and a few from today. “It investigates surprising parts of their lives,” Vause explained, which leads listeners to learn about different historical periods and understanding more about history’s villains.

As a bonus, Vause suggests the show “Ancient Aliens.” This show examines the belief that aliens visited Earth and influenced past events – diminishing the past achievements of various societies. But unlike the other recommendations listed, Vause warned that this show serves as a guideline of “what not to do” in the historical field.

Vause’s interesting and thoughtful look at history is portrayed in the pieces of media she selected. With these in mind, she wishes to inspire all students to meaningfully look at the history around them and the perceptions that they may have of the past.