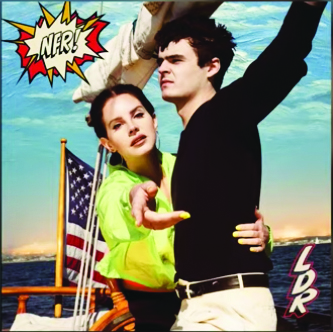 The month long anticipation for Lana Del Rey’s fifth studio album “Norman F******g Rockwell” came to an end on Aug. 30, 2019. This album was co-produced by Jack Antonoff –– known as the lead singer in the band Bleachers –– under Interscope and Polydor Records.

Her music throughout the years has always been melancholy with downbeat tunes, and this theme continues in NFR. Lyrically, she has improved and is portraying a more confident persona. She uses instruments like the piano, guitar and synthesizer but just enough that they don’t overpower her voice. This album comes to a close second, with her debut album “Born to Die,” as one of my favorite albums of hers.

Del Rey started in the music industry in 2012 when her music video for “Video Games” went viral. She has since released “Born to Die,” “Ultraviolence,” “Honeymoon” and “Lust for Life.” One of her most popular songs, “Summertime Sadness,” became a radio hit in 2012.

Norman Rockwell was a painter and author known to reflect American culture in his work. Del Rey does the same in “The greatest” when she sings “L.A. is in flames…Kanye West is blond… ‘Life on Mars’ ain’t just a song,” poking fun at today’s society. “How to disappear” –– one of my favorite tracks –– along with “Happiness is a butterfly,” portray falling in love with someone who is hurt and incapable of dealing with their emotions. However, she still tries to pursue them. Del Rey puts her own old Hollywood twist on her cover of “Doin’ Time” by Sublime, which makes the track sound dreamy rather than rock influenced like the original .

The melodies in “Bartender” and “Love Song” are simply  background music; there is nothing particularly captivating about them, but this album is definitely worth listening to if you’re searching for a “sad girl” fall soundtrack. Take the time to listen to the lyrics  and appreciate the emotions in her songs for a more intimate experience.