“Joker” Gets the Last Laugh 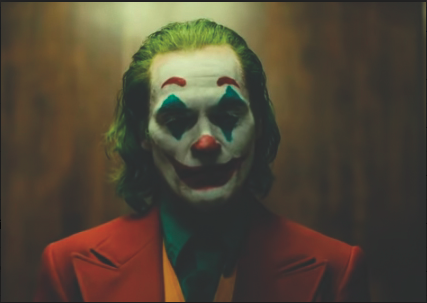 Joaquin Phoenix stars as the protagonist in “Joker.”

If you know the Joker from the movie “The Dark Knight,” or the game “Batman: Arkham Asylum,” you know that he loves one thing: chaos. But every villain (and hero) has a backstory and “Joker” (2019) delivers the timeline before the chaos, before Bruce Wayne’s parents were murdered.

Pseudobulbar affect. It’s defined by the Mayo Clinic as “a condition that’s characterized by episodes of sudden uncontrollable and inappropriate laughing or crying,” usually caused by a neurological condition. Joaquin Phoenix’s version of Joker plays upon this disorder, the result of his signature creepy laugh. At first, the audience laughs along with the Joker, or Arthur Fleck, laughs in extremely inappropriate settings. But as the movie goes on, it’s not so funny anymore.

Phoenix’s laugh is fantastically sincere and deeply creepy. Throughout Arthur’s failed attempts at standup comedy, love, and normalcy, his illness follows. The film’s central themes are mental illness and radical political factions. If you don’t know the Joker from television or video games, this may seem like the screenwriter’s attempt to make a 2019-appropriate Joker. Conversely, this has always been Arthur’s M.O., and in this case, real life is imitating film. While writing jokes, Arthur posits that the worst thing about mental illness is that people expect you to pretend you don’t have it. As he is pushed further and further to the borders of society, his fantasies turn into delusion and extreme narcissism. He’s not a natural murderer, he practices what he will do in the mirror before carrying it out. He does things we all do in private — which has unearthed criticism for anti-hero characters that make murderers seem too human.

You cannot tell an exceptional villain story without humanizing the evil in the main character. The villain has to make us notice the darkness in ourselves when we are treated like an outsider, and the struggle that those with mental illness go through. Then, you have to take it to an extreme that we all hope we would never turn into; that most of us never turn into. Think of Killmonger (“Black Panther”), who does the wrong thing for what he perceives as the right reasons — except Joker is not regarded as a badass like Killmonger, partially because of his illnesses.

This is what connects Arthur to the radical political faction that rises up in chaos as he becomes the Joker. Critics have mentioned incel culture (involuntary celibate culture that has risen up in extreme racism and mysogyny on forums like Reddit), or the alt-right (extremist right-wingers too radical for regular conservatives). What they resemble the most is the 2016 movement of “deplorables,” who reclaimed the word after presidential candidate Hillary Clinton criticized supporters of President Donald Trump for amplifying “hateful views.” Whatever the case, the viral reappropriating of the word by those who felt pushed to the political fringe is something Joker would definitely appreciate.

“Joker” holds onto the continuities of the Joker/Batman story in the D.C. Comics, but if the D.C. Universe didn’t exist, “Joker” would be an impactful stand-alone movie. It borders on classic status by expertly explaining a backstory we have passed down in our American tradition, integrating private and deeply painful aspects of human life even before 2019. Because it successfully honored the Bruce Wayne timeline (can we talk about how cute baby Batman is?), I can only hope for a sequel in which Wayne confronts the man responsible for his parents’ murder once again.